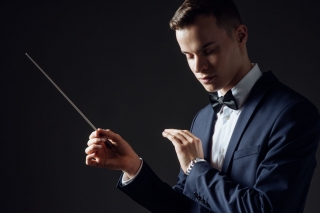 Francis Choinière has been awarded the second annual Hnatyshyn Foundation – Christa and Franz-Paul Decker Fellowship in Conducting! Launched in 2017 in honour of the late conductor Franz-Paul Decker and his wife, Christa, this $15,000 fellowship is the result of a collaboration between the Schulich School of Music, the Decker family, and the Hnatyshyn Foundation, a charity founded by Canada’s twenty-fourth Governor General to support the development of young artists. All incoming Canadian students to the Schulich conducting program are considered for the Fellowship, which can be used to support tuition, expenses, and independent projects.

Francis Choinière has more than a few of these! He has spearheaded several standout concerts and organisations that take advantage of Montreal's unique musical scene. To name only a few of his accomplishments

You can learn more about Schulich’s graduate-level conducting program here. Congratulations to Francis! We can't wait to see what else his career has in store.