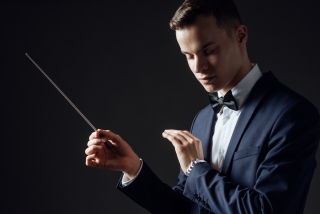 Next Tuesday marks the beginning of the Schulich Singers’ three-day tour, with concerts in Montreal, Ottawa and Toronto. Featuring music from over six centuries, these concerts will include composer-in-residence Francis Choinière’s new work “A Clear Midnight’. Known for his involvement in several ambitious projects in the choral and orchestral worlds, Francis is an accomplished pianist, baritone and conductor. In addition to being a full-time student in composition at Schulich (BMus’19), he is the co-founder and conductor of the Orchestre Philarmonique et Choeur des Mélomanes, artistic director of the l’Ensemble Vocal Trame Sonore, conductor of the Chœur Fernand Lindsay for the Festival de Lanaudière, president and production manager of GFN Productions, and has been the chorus master for several concerts at the Bell Center with internationally renowned artists such as Andrea Bocelli, Sarah Brightman, Hans Zimmer, and Ramin Djawadi.

We recently had the opportunity to talk to Francis in an email interview, where he talked to us about his career as a composer, the inspiration for his new piece as well as his future projects.

As an emerging young artist well known in the Montreal music community, you are quite well known as a singer, pianist and conductor, but also as a composer. Can you share how composition has been a part of your musical journey so far?

Composition has been a part of my life from a very young age. I began composing short pieces for piano when I was 8 years old. As my interest developed, I started taking private lessons with Dr. Felix Baril, with whom I began studying theory and orchestration. With Dr. Baril, I developed the skills I needed to compose larger scale works like string quartets, small symphonic works, and some choral pieces. Eventually I co-founded my own ensemble with cellist Elie Boissinot, called l’Orchestre Philharmonique et Chœur des Mélomanes (OPCM), with whom I premiered and conducted my own work for choir and orchestra entitled Mass in F Major. This sparked a new interest in conducting for me and since then I have decided to pursue a dual career as a conductor and composer.

How does your composition reflect Walt Whitman’s poem “A Clear Midnight” and what do you hope it communicates to audiences?

I first encountered Walt Whitman’s poem “A Clear Midnight” while singing another choral work - “Celebrations” by Vincent Persichetti. I was marked by how the text and musical setting of such a short poem could carry so much meaning. This inspired me to choose it as the text for my piece. “A Clear Midnight” is broken into four sections (one for each line of text), each painting in its own way Whitman’s thought-provoking text. Within my piece, I tried to evoke the soul’s escape from this world through death, where it can live in its truest and highest state.

This is thy hour O Soul, thy free flight into the wordless,
Away from books, away from art, the day erased, the lesson done,
Thee fully forth emerging, silent, gazing, pondering the themes thou lovest best,
Night, sleep, death and the stars.

With your company GFN Productions, you recently organized and conducted the production of “The Lord of the Rings: The Fellowship of the Rings in concert” at the Salle Wilfrid-Pelletier. Can you tell us a bit about this experience and what you have in store for the next year?

After organizing seasonal concerts with my ensemble (OPCM), and taking part in a number of professional contracts with Andrea Bocelli, Sarah Brightman, Hans Zimmer, and Ramin Djawai, I was inspired to develop and organize a new kind of concert experience. Over the summer I founded a production company called GFN Productions whose purpose is to develop the artistic scene by producing large concerts with international artists. In January 2019 we produced the first Lord of The Rings live concert experience in January at Salle Wilfrid Pelletier in Montreal with more than 250 musicians on stage. The whole concept of the show was to renew the classical concert experience to a modern audience. After that first success, we decided to continue producing film music concerts, and have since launched the Star Wars series which will make its first performance on April 19thand 20th at Wilfrid Pelletier. We have many new projects yet to come so stay tuned with GFN Productions.