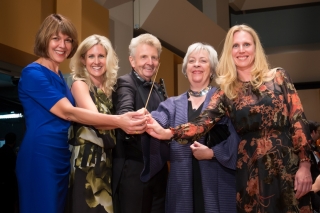 Thanks to an exciting initiative, graduate conducting students at the Schulich School of Music are now eligible to receive a substantial new award – the Hnatyshyn Foundation Christa and Franz-Paul Decker Fellowship in Conducting. Launched at Schulich in September 2017, the $15,000 Fellowship will be awarded to an exceptional Canadian graduate student at Schulich as of the 2018-19 school year.

Together, the Decker family and the Hnatyshyn Foundation created the Fellowship to honour the late conductor Franz-Paul Decker and his wife, Christa, who both made a significant impact on the musical landscape in Canada and around the world. Maestro Decker, who held conducting positions at many orchestras of international repute (including an appearance as guest conductor of the McGill Symphony Orchestra), was also an advocate of music education and received an honorary doctorate of music from McGill University in 2002.

Alexis Hauser, conductor of the McGill Symphony Orchestra, was excited to share his perspective on the opportunities the Fellowship will provide. “Some of my very best former conducting students are Canadians and are now busy and very successful in Europe, the United States and in Canada. It is a big joy for me to remain in regular contact with them.”

“Therefore, I wholeheartedly welcome the Hnatyshyn Foundation Christa and Franz-Paul Decker Fellowship in Conducting as an important means to encourage top students from around the country to come to Schulich to further develop their talents. Surely, the Fellowship will be an immense benefit for future students and I am confident that it will also help in promoting the high level of Schulich’s teaching faculty. Montreal has always been a unique starting place for young gifted conductors, and the Foundation will be an immense tool for assisting future careers.”

Two such Canadian graduates, Nicolas Ellis (M.Mus 2015) and Simon Rivard (M.Mus 2017), quickly come to mind as having come out of Schulich’s conducting program to great successes. Ellis, who won the $50,000 Bourse de carrière Fernand-Lindsay in November, is also resident conductor at the Orchestre symphonique de Québec, artistic director and founder of the Orchestre symphonique de l’Agora and will prepare the McGill Symphony Orchestra for their performance with Kent Nagano at le Maison Symphonique on February 13. Meanwhile, Rivard has also enjoyed many recent milestones, including acting as associate conductor of the Orchestre de la Francophonie in 2016 and being appointed as conductor-in-residence for the Thunder Bay Symphony Orchestra this year.

The Hnatyshyn Foundation, a private charity that contributes over $200,000 annually to the development of young artists in different stages of their career, also has a variety of other grants and awards to which students can apply. In the case of the new Fellowship, all Canadian applicants to the Schulich graduate conducting program will be considered – no separate application is necessary.