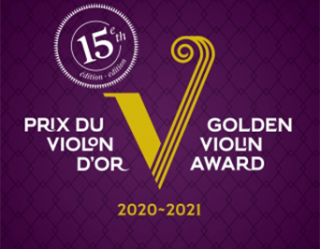 The 2020-2021 Golden Violin Award will be given out to one extraordinary string player this weekend.

Established in 2006 by businessman and philanthropist Seymour Schulich, the competition has grown from an internal juried nomination process to a public recital format with semi-final and final rounds showcasing the best of the Schulich School of Music.

The Golden Violin Award, valued this year at $30,000, is presented to an outstanding string player currently enrolled at the Schulich School of Music. The winner receives not only the generous scholarship but also a smaller likeness of the violin in the form of a 14-karat gold lapel pin and a concert during the Schulich concert season.

Growing out of a desire to select a string player who showed exceptional promise as a musician and community leader, this prestigious award has led to the flourishing of numerous careers and artistic endeavours on the Canadian and international music scenes.

In celebration of this year’s 15th anniversary, some past winners share thoughts on the significance of their time at Schulich and the enduring impact of the Golden Violin Award.

Aaron Schwebel (BMus'10 | GVA Winner 2009-2010): Don’t work too hard! Make sure you give yourself the time and space to grow as an artist and a human. The experiences and relationships you have shape what kind of musician you are, and these formative years of your adult life are so important for making meaningful and lasting connections.

Joshua Morris (MMus’17, Gr Dip in Perf’18 | GVA Winner 2016-2017): Use your creative imagination! It’s easy to have too narrow a focus and end up feeling stuck with what you’re doing.  When I’m feeling that way, I’ve found it helpful to take a step back and really let my imagination run wild. Even if some of the resulting ideas seem overly ambitious or silly, they often end up turning into something useful, like a different practice strategy or a new programming/performance idea.

Byungchan (Chan) Lee (BMus’15, Art Dip’16 | GVA Winner 2014-2015): The demands of being a musician today are in constant flux. Stay curious, open-minded, and always “go for the music” as my former teacher Denise Lupien aptly put.

Aaron Chan (BMus’20) | GVA Winner 2020-2021: Make mistakes! Don’t be afraid to be a fool. Every wise person starts out as a fool. Embrace ideas that are contradictory to your own beliefs instead of fearing them!

Could you share some lessons learned during your degree?

Chloé Dominguez (Art Dip’03, MMus’05, DMus’09 | GVA Winner 2008-2009): The Schulich School of McGill University helped me to find my voice as an artist. It was the right place at the right time, with the exact right amount of freedom and supervision, and with the right mentors for me to flourish. Not that our personal growth is something fixed — it’s always changing — but my years at McGill were a time when I felt like I learned to breathe freely. I finally stopped trying to fit the mold and was able to express my own identity as a cellist and musician.

Emmanuel Vukovich (BMus’07, Gr Dip in Music’13 | GVA Winner 2006-2007): When you trust your curiosity, you will learn something that interests you, which you will remember for the rest of your life.

Aaron S: I definitely did not expect to learn as much as I did from my fellow classmates. I feel really lucky to have been a student alongside so many talented people -- many of whom I continue to work with closely. We helped and encouraged each other to be the best we could be, and this supportive atmosphere was in a large part fostered by the wonderful faculty. I have fond memories of popping my head into neighbouring rooms in the fourth-floor practice corridor, and doing or listening to run-throughs with friends. The support and inspiration I drew from the students around me is a huge reason why those four years at McGill have such a special place in my heart.

If you had a mantra/philosophy/phrase that sums up where you are now, what would it be?

Emmanuel: There is no try. Only do or do not!

Aaron C: “No tree, it is said, can grow to heaven unless its roots reach down to hell.”—Carl Jung

Chloé: Follow your gut feeling and go with the flow.

Chan: Multiplicity of experience and self-challenge inform the artist.

Isaac: Be serious, but don't take yourself too seriously.

Can you share a memory about when you received the Golden Violin Award?

Emmanuel: Getting a call at 6 am while I was on tour — that I was to receive a new big award ...

Joshua: I remember being completely exhausted before the announcement was made. There were 5 finalists that year and I think the concert was on a Sunday night, so everyone was really worn out by the end — I don’t think they called us to the stage to announce the winner until 11 p.m.! It was definitely worth the wait to hear my name called, though.

Aaron C: The night before the Finals of the competition, I couldn’t sleep. I was sweating uncontrollably, and had a terrible sleep. It was hard for me to focus in the following day, because I was so stressed for the performance in the evening, hoping that it would be how I normally practiced. A few hours before the performance, I took a nap, and tried to remember what began my attraction to music. It was not for its perfect execution or the technical virtuosities. Perhaps some might be drawn to that, and there’s nothing wrong with it. But for me, the philosophical and emotional depth that music brings forth is what has always motivated me. So, I decided to focus on that instead. I accepted that I would probably make mistakes in the performance, but as long as I was trying to express what I believed were the messages of the music, that was all that mattered. And I did make mistakes. But I also tried my best to express the music. For me, that is a much more rewarding experience. I didn’t play for the results, but instead I played for the search of the impetus that had always served as the driving force in my passion for music. (There is a belief among the Hasidic and Christian traditions that the pathway to a perfect being/paradise is to regain what has been lost since birth/childhood. I find this notion very interesting and profound. With all the years of studying historical traditions and knowledge of music, I find it quite easy to forget the curiosity and wide-eyed wonder that got me here in the first place.)

Any words of wisdom for future Golden Violin Award candidates?

Aaron C: Have a good time! Enjoy sharing music with the audience. After the year of 2020, I think we all know how precious it is to be able to perform, to own a stage and share your own voice.

Emmanuel: Awards follow the success of realizing daily achievements. Focus on setting and realizing these daily goals. Everything else will follow from there.

Chan: Communicate your personality through your music!

Joshua: You’ll inevitably be nervous when you go up to perform, but don’t let the situation overwhelm you — remember what got you here! Getting to this stage means that a lot of people believe in your abilities, so try your best to have fun and show the audience what you can do. (Honestly, this applies to performances in general.)

Victor: This may sound cheesy, but I'd say: do it with love. The more we focus on our love of music, the better we play and the more satisfaction we get out of it. Forget about the judges!

What did the Golden Violin Award enable you to do?

Joshua: As a result of winning Golden Violin, I was invited to play in several solo and chamber recitals, including a concert at the Roerich Museum in New York the following spring. Nicholas Roerich designed the sets for the premiere of Stravinsky’s Rite of Spring, and performing in a gallery surrounded by his artwork is — still to this day — one of my favorite concert experiences.

Chloé: As string players, finding an instrument of high quality that suits your playing is extremely important in the pursuit of a professional career. In my doctorate years, we spent around two years looking for the perle rare, the perfect fit. We finally found it in a beautiful cello made by Lorenzo Carcassi in 1745, from Florence. The Golden Violin Award helped me greatly in my search and acquisition of this instrument.

Lambert Chen (DMus’08 | GVA Winner 2007-2008): It was with uncertainty and even trepidation that I started my last year of studies at McGill due to the competitive reality I would be facing after graduation.  Upon receiving this award, I became much more confident and optimistic about my future as a professional musician.  I understood then, with the guidance and support of Prof. André Roy, that at any stage of our lives one has to always aim for excellence while keeping a sense of wonder.

Ewald: The award allowed me to pursue competing in international competitions, performance opportunities and further studies in New York.

Isaac: With the award, I was able to purchase three historical bows which allowed me to explore certain aspects of performance practice. This led me to my job at les Violons du Roy... The award helped tremendously!

Aaron C: It is safe to say that without the Award, I would have had a difficult time pursuing my Master’s degree. The Award opened up pathways for me to connect and familiarize among the Classical music society in Montreal, and I am very grateful for it. For instance, the recital held at the Chapelle historique du Bon Pasteur allowed me to connect with the local audience, to interact and engage with them personally. Although the Covid pandemic might have put things to a halt, I certainly hope to return and reconnect with the musical scenes in Montreal soon!

Victor: For me it was a stepping stone: I had often played for auditions and competitions on the violin, but rarely on the viola - and even less on both instruments, as I did for the Golden Violin Award. Preparing thoroughly with André Roy's excellent guidance boosted my progress on the viola and gave me the confidence I needed to win my first OSM audition, shortly after.

Emmanuel: To believe in myself enough to trust and follow my own intuition.

Chan: In brief, the award created meaningful performance opportunities (both solo and chamber music) and allowed me to pursue further studies in New York City.

Aaron S: The Golden Violin Award enabled me to buy a new violin, but it signified more than the prize money of course. Being a recipient of such a coveted award gave me a higher standard to work towards as I embarked on the next stages of my education. It was and still is an honour to be named among so many brilliant musicians, and it’s something I work hard to merit every day.