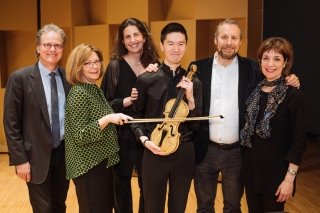 Congratulations to violinist Aaron Chan, who won the  2019-2020 Golden Violin Award  on Friday evening following a standout 40-minute performance in Pollack Hall alongside collaborative pianist Felix Hong. Played before a five-person jury and enthusiastic audience, Aaron’s winning program for the final round included  Edvard Grieg's Sonata for Piano and Violin in C minor, Op. 45, and Henryk Wieniawski’s Variations on an Original Theme, Op. 15. All of the students involved in the semifinals and final rounds (violinists Alicia Choi, and Russell Iceberg, and cellists Braden McConnell, and Shulamit Sarid) are some of Schulich’s most accomplished string players.

Born in Canada and raised in Hong Kong, Aaron went abroad to the United States in 2015 to study with Stephen Rose at the Cleveland Institute of Music (2015-2018) and is now continuing his studies with Jinjoo Cho at Schulich to pursue his Bachelor of Music. He has also coached with the Cavani String Quartet, Peter Salaff, Ivan Chan, Michael Ma, and participated in masterclasses given by Phillip Setzer, Roberto Díaz, Guillaume Sutre, Boris Kuschnir, Augustin Hadelich, and Mihaela Martin.

In 2017, Aaron participated in the Kronberg Violin Masterclass with Boris Kuschnir, and also spent the summers of 2017 and 2019 at the Aspen Music Festival studying with Paul Kantor. In the spring of 2018, Aaron performed with CIM Orchestra in the Severance Hall as an award for winning the Concerto Competition in the Fall of 2017. In 2018, he was selected to participate in the International Violin Competition of Indianapolis. In 2019, Aaron participated in the McGill International String Quartet Academy with the Lafontaine Quartet, a school-formed quartet from Schulich, receiving coachings from world-renowned professionals (members of the Alban Berg Quartet, Artemis Quartet, Quatuor Ébène, and Takács Quartet).

New to the competition this year was the addition of a public semifinal round, in which five Schulich students participated on Thursday, November 14. This year’s competition also saw a move away from students entering the competition via nomination as in previous editions. Prof. Douglas McNabney (Associate Dean, Academic and Students Affairs, and coordinator of the Golden Violin Competition) provided further comment on the competition’s new processes.  “This year, the competition followed new procedures where we accepted applications from the entire pool of eligible string players at the Schulich School of Music. The preliminary jury consisted of ten staff teachers of the String Area and they were highly impressed with the level of musicianship demonstrated by all candidates.”

Beyond pure musical ability, the jury also considered each candidate's CV of public performances, and placed particular emphasis on the contribution to Schulich and the larger McGill communities. These were points to consider, as Prof. McNabney explained that the Award’s winner becomes an ambassador for Schulich both onstage and off.

In addition to external guest jurors Gwen Hoebig (Concertmaster of the Winnipeg Symphony) and Université de Montréal professor Laurence Kayaleh, this year’s jury also included Schulich professors Elizabeth Dolin, André Roy, and Douglas McNabney. Before making their final decision, full jury had an opportunity to hear all the candidates over the course of the two evenings of performance and in diverse repertoires.

The Golden Violin Award was established in 2006 by businessman and philanthropist Seymour Schulich, a year after he donated $20 million to McGill's Schulich School of Music. The competition’s first-place winner receives a generous scholarship (valued at $25,000) as well as a 14-karat gold violin lapel pin. This year, all of the other finalists also received a $1000 cash prize.

In addition to the monetary award, the first-place winner is also acknowledged on the Golden Violin sculpture itself, which is made of pewter and gold plate and remains on permanent display in McGill's Marvin Duchow Music Library. Finally, the winner will be invited to appear in a  public performance on Sunday, February 9, 2020, at La Chapelle historique du Bon-Pasteur.