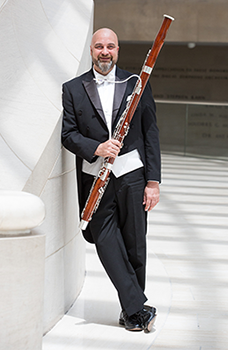 Join us for the 17th annual Bassoon Day at McGill! This year’s special guest is Ted Soluri, the principal bassoonist of the Dallas Symphony Orchestra.

We look forward to seeing you at Bassoon Day!

All events are free and open to the public.

In 2017, Mr. Soluri was thrilled to release his debut CD entitled Sempe Libera. The recording includes opera arias played on the bassoon and stemmed from Mr. Soluri’s great love of the voice and operative repertoire specifically. The recording has received high praise and is available on Amazon, iTunes, and Spotify.

Throughout his career, Mr. Soluri has attended many music festivals, including the National Repertory Orchestra, the National Orchestral Institute, and the Los Angeles Philharmonic Institute. In 1994, he was privileged to work under Sir Georg Solti at Carnegie Hall as a member of the prestigious Solti Orchestral Project. In the summer of 2005, Mr. Soluri was invited to play as principal bassoonist for three weeks at The Grand Teton Music Festival in Jackson Hole, Wyoming. He is also a regular performer with the Santa Fe Chamber Music Festival.

Mr. Soluri received his Bachelor of Music degree from The Florida State University and his Master of Music degree from The Cleveland Institute of Music. His teachers were John Hunt, Jeffrey Keesecker and David McGill. Besides his bassoon teachers, Mr. Soluri credits soprano Maria Callas as one of his greatest musical inspirations. He plays Fox bassoons and is a Fox Artist.
For more information, please visit www.tedsoluri.com

Alexandra Eastley recently moved back to Montreal where she is playing Second Bassoon with the Orchestre Symphonique de Montréal for the 2018/19 season. Previously, she was Principal Bassoon of the Winnipeg Symphony Orchestra from 2007 to 2018.

Alex began her Bachelor of Music degree at the University of Toronto with Nadina Mackie-Jackson and completed it at the Curtis Institute of Music with Bernard Garfield. She earned her Master's degree in solo bassoon performance from McGill University where she studied with Stéphane Lévesque.

In addition to teaching privately, Alex teaches during the summer at the International Music Camp at the International Peace Gardens and the Curtis Institute of Music Young Artists Summer Program in Philadelphia. She has served as sessional instructor at the University of Manitoba and Memorial University, and was on faculty at Brandon University from 2014 to 2018.

Born in Montréal, Stéphane Lévesque has been Principal Bassoon of the Orchestre symphonique de Montréal since the fall of 1998. He has also held principal bassoon positions with the National Arts Centre Orchestra in Ottawa, the Buffalo Philharmonic Orchestra, and the Saito Kinen Orchestra in Japan. Mr Lévesque is Assistant Professor at the Schulich School of Music of McGill University, and he has given master classes in institutions which include the Banff Centre, the Curtis Institute in Philadelphia,  the Conservatoire National Supérieur de Lyon in France, and the National School of Music in Mexico City. He has appeared as soloist on many occasions with the OSM, as well as with ensembles such as the Orchestre symphonique de Québec, the New World Symphony, Les Violons du Roy and the U.S. Army Orchestra. Mr Lévesque studied with Stephen Maxym and Frank Morelli at Yale University, and with Rodolfo Masella at the Montréal Conservatory.

Michael Sundell was appointed to the contrabassoon position with the Orchestre symphonique de Montréal in 2011.  He attended the Cincinnati College-Conservatory of Music, where he studied with William Winstead, and Rice University as a student of Benjamin Kamins. Prior to coming to Montreal, Mr Sundell was a member of the Colorado Symphony, and he has also held positions with the Milwaukee Symphony, Tulsa Philharmonic, and Virginia Symphony. He also enjoyed an extensive career as a freelance musician working with many orchestras throughout the U.S. including the Chicago Symphony, Los Angeles Philharmonic, National Symphony, and the Kennedy Center Opera.