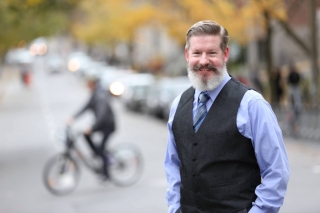 Since joining Schulich’s faculty in 2007, Prof. Hansen has worked hard to transform the Opera McGill program into what it is today. With a focus on training future-ready singing actors, this evolving program now features individualized coachings with over a dozen speciality coaches; newly organized courses for singers of different levels that focus on acting and audition techniques, business aspects, along with traditional aria coachings; and at least three professional level productions a year with orchestral accompaniment. With Prof. Hansen’s dedication to teaching, it’s unsurprising that his nominators had so many meaningful sentiments to share. In letters of recommendation, his students commended Prof. Hansen on his ability to break down barriers and provide opportunities, his fearless belief in his students, and his desire to push students to think outside the box.

In celebration of this achievement, we asked Prof. Hansen to elaborate on his teaching philosophy as well as how the program has evolved over the years.

How has your teaching philosophy evolved since joining the Schulich School of Music?

I arrived at McGill as an educator who loved the Socratic method. While still quite a useful mode of investigating scores, I find more and more I’m someone who tries to nurture an intense curiosity to collaborate – with composers, librettists, designers, peers, pianists, et al – in order for students to emerge as authentic artists who can communicate their own ideas about opera. Because of the last ten years’ renaissance of new opera, we now have more opera being written than at any time since the 19th century, so keeping up with the new repertoire is a challenge. I’ve certainly realized that for me to inspire, I need to continue to be inspired myself –teaching a Shakespeare seminar, writing opera librettos, performing with students in public performances, continuing to blog on opera intersecting with other cultural genres, and keeping up my own directing and conducting professional career. All of these various parts of my life contribute to how I teach our incredibly talented students.

What inspired you to develop the Opera McGill program in the way you did?

My time as a fellow at The Juilliard School (as a young vocal coach) was when I first experienced what it was like for an opera center to offer a variety of intense one-on-one coachings given by a team of specialists. The best diction coaches were there (Nico Castel, Corradina Caporello, Kathryne LaBouff), amazing dramatic coaches like Frank Corsaro, plus wonderful musical coaches and conductors including Richard Bradshaw. The singers received individualized attention and progressed so quickly. That kind of nurturing environment is important for a young singer’s training. The process of learning at a school is much more important than any one production. One of the reasons Opera McGill’s productions are of such high quality is because the process of coaching and rehearsing that precedes those performances is on such a professional level. It became clear that if Opera McGill was going to nurture progressive singers, divergent thinking should be used to imagine a more interconnected holistic opera training program.

What does a future ready singer look like to you?

A singer who understands that opera should not be boxed in or defined in traditional terms. Opera is now sung everywhere and anywhere, so a singer in the 21st century may find themselves singing a world premiere of a piece in a traditional huge theatre while also performing an updated Carmen in a parking garage with live camera crews doing close-ups. Emerging artists need to be as flexible in their abilities and repertoire as possible. They need to be ready to embrace members of diverse communities, become teacher-artists themselves, and especially, not fear any kind of music or musician – be it ancient or modern, Singspiel or musical, acoustic or electronic, classical or pop. Most importantly, they need to be collaborators who walk into their rehearsals as prepared as possible with ideas to share. This past fall, my students and I – along with Professor Stephen Hargreaves – performed a “5à7” in the lobby of the Elizabeth Wirth Music Building that was filled with mash-ups of pop and classical music. We called the evening “Ariapalooza”. I ended up arranging an operatic version of the Moulin Rouge love songs mashup, that ran the gamut of the 400+ years of opera, but in about twelve minutes. A countertenor sang a Vivaldi aria and then in the middle of it, we cut to a version of Frank Sinatra’s “I did it my way”, and then back again to Vivaldi. Showing my students to not take themselves seriously, but take the art as seriously as possible, is one way to inspire them to think outside of the traditional classical music box. Boxes literally exclude by their nature, so when one decides to create without borders, to make art without definitions, one finds that exclusion gives way to inclusion effortlessly.

About the Schulich School of Music Teaching Awards

Each year the Schulich School of Music recognizes faculty members and student instructors for their outstanding contributions. The Schulich School of Music Teaching Awards recognize excellence, commitment and innovation in teaching, and the importance of these qualities in the academic experience of students at McGill. Prizes are awarded annually to each winner at Spring Convocation.