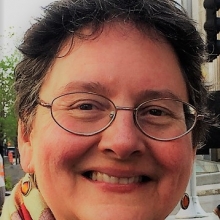 Renaissance music; musicology; the motet; the madrigal; improvisation and compositional process; digital humanities; history of the book; music notation 1100 to 1600.

Re-examining the origins of the madrigal, using empirical and cultural evidence.

Mapping the Musical Landscape of the 16th Century: How does music move across time, space, and cultures.

Professor Cumming's major area of expertise is late Medieval and Renaissance polyphony.  She is the author of The Motet in the Age of Du Fay (Cambridge University Press, 1999), in which she explores the transformation of the motet from 1400-1474. She has published articles and reviews in Speculum (the journal of the Medieval Academy of America), the Journal of Musicology, New Grove Opera, and Early Music, as well as in numerous edited collections, including the Cambridge History of Fifteenth-Century Music. Her current work looks at fifteenth- and sixteenth-century compositional process, with emphasis on the connections between historical improvisation and composition; she often collaborates with her colleague in Music Theory, Peter Schubert. Other areas include analysis of Renaissance music, book history and music printing in the Renaissance, baroque opera, and digital humanities in music. She was the principal investigator of an international Digging into Data Challenge Grant, “Electronic Locator of Vertical Interval Successions (ELVIS): The first large data-driven research project on musical style” (2012-2014; http://elvisproject.ca/ ).  She is the co-leader (with Ichiro Fujinaga, PI) of a SSHRC Partnership Grant, “SIMSSA: Single Interface for Music Score Searching and Analysis” (2014-2021; https://simssa.ca/ ). She was a co-investigator on the SSHRC Major Collaborative Research Initiative “Making Publics” (Paul Yachnin, PI, 2005-2010; http://makingpublics.mcgill.ca/ ), and is currently a co-investigator on the SSHRC Partnership Grant “Early Modern Conversions” (Paul Yachnin, PI, 2013-2018; http://earlymodernconversions.com/ ).

Western Musical Traditions: a music history course, 12th to 21st century, where two-thirds of the pieces are by women.

Music Paleography: the history of music notatin from the 12th through the 16th century.