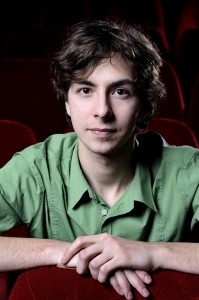 The Composition Area of the Schulich School of Music is pleased to announce that one of its former students, Thierry Tidrow (BMus, Honours Composition and Major Music Theory, 2009) is the recipient of the 2014 Jules Léger Prize for New Chamber Music. During his bachelor's program, Mr. Tidrow studied composition with Professors Christoph Neidhöfer and Brian Cherney.

Awarded annually, the Jules Léger Prize is a Governor General's Award, and is the highest distinction a composer may receive for his/her work in Canada. Submissions for the award are reviewed anonymously.

Mr. Tidrow's win continues a recent trend which has seen the attribution of the Jules Léger Prize to former McGill composition students five times since 2009, as follows:

In the less-recent past, two other former students were recognized as follows:

In summary, of the award's 39 editions, current and former McGill faculty and students account for 16 citations, almost half the total number, attesting to McGill's superlative ongoing contribution to the professional milieu of music composition in Canada today.