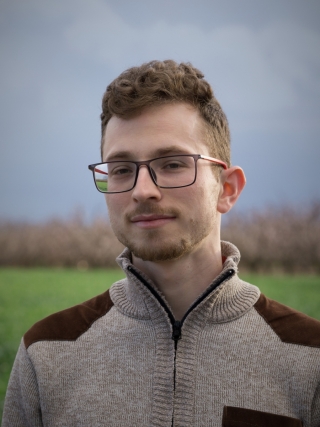 Congratulations to Omer Barash, winner of the 2019-20 Andrew Svoboda Memorial Prize for Orchestral Composition. Omer’s orchestral piece will be premiered by the McGill Symphony Orchestra in the 2021-2022 season.

Omer Barash (b. 1995, Israel) is a composer currently pursuing his master’s degree at McGill University with Philippe Leroux, and is the incoming president of MASC, the McGill Association of Student Composers. Before coming to Montreal, he completed his bachelor’s and first master’s degrees at the Jerusalem Academy of Music and Dance, where he studied with Ari Ben-Shabetai, Yinam Leef, and Karel Volniansky, and was a composer in residence of the Tedarim programme of new music, mentored by the Meitar Ensemble.

His main compositional interests include the exploration of energetic and instrumental gestures and working with listeners’ real-time prediction of musical materials’ unfolding.

Forthcoming and past engagements include collaborations with, and commissions from ensembles such as the McGill Contemporary Music Ensemble, Paramirabo (Canada), Reconsil (Austria), Meitar (Israel), Duo Ardorè (UK), Trio Arbós (Spain), and the Savaria Symphony Orchestra (Hungary). Collaborations with conductors such as Pascal Gallois, Christian Lindberg, and Guy Braunstein have taken place as well.

Omer is the recipient of several prizes and awards, including the 1st prize of the Klon Award for emerging composers from the Israeli Composers League, merit grants from the America-Israel Cultural Foundation, 1st prize of the Kopytman Composition Contest at the Jerusalem Academy, and the Audience Choice Award of the Netanya-Kibbutz Orchestra.

The jury members were excited with the selection of music Omer submitted in his application for the award. Jury member and Associate Professor of Composition Melissa Hui noted that she was particularly impressed with Omer’s “creativity and sonic imagination” and his “outstanding progress in musical maturity”.

“I consider winning the Andrew Svoboda Memorial Prize a great privilege. It’s very rare for a student composer to be able to hear a full-length piece of theirs being performed by a symphony orchestra. This award has immense educational value. In this project, I also intend to include an electronics part, which will be a challenge, no doubt – both poetically and technically – but I’m looking forward to working on it a lot!

I’m also very excited about the opportunity to have my piece played by McGill musicians. Since coming here, I’ve had some wonderful experience working with enthusiastic, engaged, and extremely skillful young performers. They were all eager to play new music and to experiment with some strange modes of playing. This friendly and exploratory spirit will, for sure, inspire me while working on the new piece for the MGSO!”

The Andrew Svoboda Memorial Prize for Orchestral Composition was created in memory of Andrew Yin Svoboda (BMus '00, MMus '04), who died suddenly at the age of 27 in 2004. The prize seeks to recognize excellence in orchestral composition, encourage the creation of new Canadian orchestral works and provide enriched pedagogical opportunities for student composers and performers through an annual commissioning prize of $5,000 for an orchestral piece to be premiered by the McGill Symphony Orchestra. A high quality, non-commercial archival recording of the premiere will also be provided to the composer.