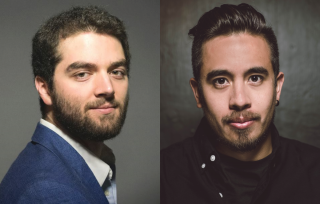 The Schulich School of Music is pleased to announce that this year’s Eleanor Stubley Recording Prize will go to Martin Daigle (MMus '20) and Omar Miranda (M.Mus. '21) for their project “Mossy Cobblestone”.

The project will consist of presenting contemporary solo percussion repertoire organized in a musical timeline; specifically, representing the effect of humans on the stability of the earth’s climate. The musical journey will carry listeners from the earth formation to the undetermined future of our planet through inclusive and immersive multi-genre music that is both accessible and elaborate. To bridge the gap between contemporary percussion and jazz drum kit, the selected repertoire illustrates multi-genre percussion and drum set playing, through-written compositions, and elements of improvised music. The selected composers were chosen for their innovative approach to percussion instruments, their eclectic styles, and their variety in musical genres.

The recording will utilize immersive audio to bring a new level of dimension by allowing the listener to enter into an immersive sound space. The state-of-the-art technology will allow such a tool to reach the public with a basic set of headphones. Using immersive audio processing and mixing will allow the listener to feel a heightened sense of space and, overall, a more organic listening experience with the final product.

Established in 2016 by the late Professor Eleanor Stubley to facilitate excellence and innovation in music performance and creation, the prize is awarded by a committee established by the Dean to an outstanding graduate student in a performance, composition or conducting program at the Schulich School of Music for a transformative recording project.

Martin Daigle is an Acadian musician from the Greater Moncton Area located in New-Brunswick. He studies contemporary percussion at the Schulich School of Music of McGill University where he will enroll as a doctoral candidate in the Fall of 2020. He worked on haptic-enhanced drum-kit learning with the financial assistance of a CIRMMT Student Award (haptic tutor). With a Graduate Mobility Award, he traveled to Israel to study drum-kit technique and movement with Yoni Madar. He has performed in festivals such as Acadie Rock, Congrès Mondial Acadiens 2019, FestiChoeur d'Acadie, Halifax Jazz Festival, Harvest Blues and Jazz, Inspire, Indian River Festival, Mud City Meltdown, and many more.

Omar Miranda has over five years of experience working as a highly versatile live sound engineer. He has worked on around 400 national and international concerts in stadiums, arenas, clubs, and more. He is an AES member and graduate of Sound & Acoustic Engineering. Omar is the co-owner of La Bulla Producciones Ec, a recording studio established in Ecuador in October 2017. Omar's studio engineering work can be heard on several singles, albums, and live recordings. His work was featured on YouTube channels such as Epicentro Arte, Expresarte XT, and Rooster Sessions. His passion for audio engineering motivated him to enroll in the master's degree in Sound Recording at McGill University in Montreal.