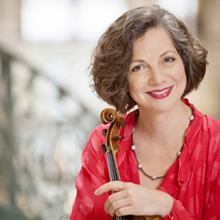 An artist deeply dedicated to the range of violin and chamber music repertoire, violinist Violaine Melançon is Associate Professor of Violin at the Schulich School of Music at McGill University, and serves on the violin and chamber music faculties of the Peabody Conservatory. She was for thirty years the founding violinist of the Peabody Trio which was ensemble-in-residence at the Peabody Conservatory from 1987 to 2016. After winning the prestigious Naumburg Chamber Music Award in 1989, the Peabody Trio established itself as an important presence in the chamber music world as vivid interpreters of the classics of the repertoire, advocates for new music, and dedicated teachers and mentors to a generation of young musicians. As a member of the Peabody Trio, Ms. Melançon gave a New York debut in 1990 at Alice Tully Hall and has performed in the most important chamber music series in North America, including New York, Washington, DC, Chicago, Denver, Vancouver, Montreal, Seattle, San Francisco, Los Angeles, San Diego, Indianapolis, Dallas, Honolulu, Memphis, Minneapolis, New Orleans, Portland, St. Louis, Boston and Philadelphia. With them, Ms. Melançon toured internationally, frequently performing in England, making repeat appearances at London’s Wigmore Hall, and in Japan and Israel.

She has a special affection for the music of today and is a serious interpreter of works of Gyorgy Kurtag, Mauricio Kagel and Zhou Long. The Israeli composer Shulamit Ran wrote a violin concerto for her and she has premiered several works by other leading composers. Among the artists with whom she enjoys collaborating are pianists Leon Fleisher, Gilbert Kalish and Peter Frankl, soprano Phyllis Bryn-Julson, and violist Roger Tapping.

During the spring of 2012, she presented the complete works for solo violin by J.S. Bach. She performs recitals annually, exploring unusual gems of the solo and violin-piano duo repertoire. Ms. Melançon is from Québec, Canada. After receiving First Prize in violin at the Conservatoire de Musique, she continued her studies with Ivan Galamian at the Curtis Institute of Music, with Isadore Tinkleman at the San Francisco Conservatory and with Arthur Grumiaux in Belgium. While at Curtis, she was a member of the Nisaika Quartet, prize winner of the 8th International String Quartet competition in Evian, France. Ms. Melançon is also the recipient of many awards for solo performance including the 1984 Prix d’Europe. In 1983, she formed the Knopp-Melançon Duo, an artistic collaboration which would eventually expand to become the Peabody Trio. In 1987, as a result of having been appointed USIA Artistic Ambassadors, the duo toured abroad extensively and made their Washington, DC debut at the Kennedy Center. Since then, her activities as a chamber musician, soloist with orchestras, and teacher have taken her to major music centers in the United States, Canada, Europe, the Middle East, and Japan.

She has participated in many summer festivals as violinist, teacher and guest artists, including those of Tanglewood, Ravinia, Skaneateles, Rockport, Orford, and Domaine Forget. She gives yearly masterclasses at the Green Mountain Chamber Music Festival, and teaches regularly at NOI, the National Orchestral Institute and Festival. For many years, she has served on the faculty of Yellow Barn (www.yellowbarn.org), an international gathering of artists who meet each summer to explore the vast riches of the chamber music repertoire. In 2018, she will also be on the faculty of Domaine Forget and the Summer Violin Institute at Northwestern University. Violaine Melançon’s performances can be heard on the Naxos, Artek, CRI, and New World Records labels.