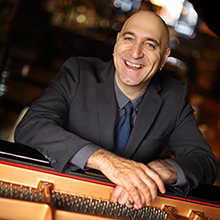 “Steve Amirault is an exceptional artist.” -The Whole Note

Steve Amirault is considered one of the most accomplished artists in Canada. The Nova Scotia-born veteran of the Montreal jazz scene has recently returned from a fruitful 4-year stint in Toronto.

The award-winning musician has released six recordings to critical acclaim. His most recent, Hold On, Let Go, finds the artist delving into timeless songs from the American popular songbook, including “All Of Me,” “Moon River,” “Embraceable You,” “Lullaby of Birdland,” as well as two original pieces, “Just Believe” and “Japanese Lullaby.”

In November of 2017, Amirault received a Canada Council grant to tour his latest release. Performances were given at the YardSuite Jazz Festival in Edmonton, the YYC Jazz Festival in Calgary, Frankie’s Jazz Club in Vancouver, and Cafe Resonance in Montreal. Also included on this tour were masterclasses given at MacEwan, Capilano, and Concordia universities.

Amirault has been awarded several honours and prizes. A laureate of the Montreal International Jazz Festival Competition, he’s also received a Prix OPUS (Album of the Year for Breath); two Juno Awards for collaborations with François Carrier on Compassion and Christine Jensen on Treelines; nominations at three editions of the National Jazz Awards Canada (Best Keyboardist, Best Acoustic Group, and Best Album); an ADISQ nomination (Best Jazz Album for Breath); and a Felix Award (ADISQ) for his contribution to Rémi Bolduc’s Hommage à Charlie Parker album.