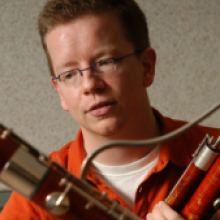 Born in Montréal in 1972, Stéphane Lévesque has held the position of Principal bassoon with the Orchestre symphonique de Montréal (OSM) since 1998. He has served as Principal bassoon with the Saito Kinen Orchestra in Matsumoto, Japan, the National Arts Centre Orchestra in Ottawa, and the Buffalo Philharmonic Orchestra. He was also a member of the New World Symphony in Miami Beach, and took part in the Solti Orchestral Project at Carnegie Hall.

Assistant Professor at the Schulich School of Music of McGill University, Mr Lévesque was the recipient of the 2011-12 Schulich School of Music Teaching Award. A guest artist at the Orford Arts Centre since 2000, he is the coordinator of the Orford Wind Octet Workshop, and he also served on the faculty of the Université de Montréal from 1998 to 2004, and of the Banff Centre from 2002 to 2008. His former students now hold positions in orchestras and music institutions in Canada, Australia, Germany, Japan, Mexico, and the USA.

Mr Lévesque has given master classes in numerous music institutions throughout the world, including the Curtis Institute of Music, the Manhattan School of Music, the Oberlin Conservatory, the New World Symphony, the Glenn Gould School, the National School of Music (UNAM) in Mexico City, the Conservatoire National Supérieur de Musique in Lyon, and the Conservatoire de Lausanne (Switzerland).

Mr Lévesque has been featured as guest soloist with the OSM on numerous occasion since 1995, and most recently performed as soloist with the orchestra in the fall of 2010, in the Concerto in F Major by Carl Maria von Weber, conducted by Kent Nagano. He has also performed as soloist with ensembles such as the Orchestre symphonique de Québec, the New World Symphony, Les Violons du Roy in Québec City, the Thirteen Strings Chamber Orchestra in Ottawa, the U.S. Army Orchestra, and the McGill Contemporary Music Ensemble.

Stéphane Lévesque commissioned and premiered new works for bassoon by Gary Kulesha (Sonata for bassoon and piano, 2011) and Ana Sokolovic (Concerto for bassoon and seven low strings, 2009), both with the financial assistance of the Canada Council for the Arts. He has given the Montréal premieres of solo works by Sofia Gubaidulina and Michael Daugherty, as well as the North American premiere of Elliott Carter's Au Quai (written for Oliver Knussen's 50th birthday) for bassoon and viola at the Monadnock Music Festival in New Hampshire, and the world premiere of Gary Kulesha's Sixth Chamber Concerto at the Banff Centre.

As recitalist and chamber musician, Mr Lévesque has appeared throughout Canada and the US on series and in festivals such as the Ottawa and Montréal Chamber Music Festivals, the Banff Arts Festival, the Orford Arts Festival, the Monadnock Music Festival, Musica Camerata Montréal, Allegra Chamber Music, the Debut Series at the National Arts Centre, and in concert broadcasts on the English and French CBC networks as well as on National Public Radio in the US.

Recipient of grants from the Canada Council for the Arts and the Québec Arts and Letters Council during his studies, Stéphane Lévesque was a first prize winner at the OSM-Standard Life Competition and at the Orchestre symphonique de Québec competitions in 1994, as well as at the concerto competitions of the New World Symphony (1996), Yale School of Music (1995) and the Conservatoire de musique de Montréal (1992).

Stéphane Lévesque holds two Premier Prix (undergraduate) degrees, in bassoon and chamber music, from the Conservatoire de musique de Montréal, where he studied with Rodolfo Masella. He also studied with Stephen Maxym and Frank Morelli at the Yale School of Music, where he obtained a Master of Music degree.