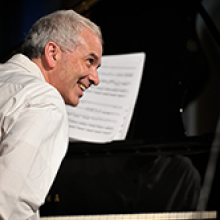 Pianist Stéphane Lemelin is well-known to audiences throughout Canada and regularly tours in the United States, Europe and Asia as soloist and chamber musician.

His repertory is vast, with a predilection for the German Classical and Romantic literature and a particular affinity for French music, as evidenced by his more than twenty-five recordings, which include works by Fauré, Saint-Saëns, Debussy, Poulenc and Roussel.  Stéphane Lemelin is director of the French music series “Découvertes 1890-1939” on the  Atma Classique label, dedicated to the rediscovery of neglected early twentieth-century French repertoire and for which he has recorded works by Samazeuilh, Ropartz, Migot, Dupont, Dubois, Rhené-Bâton, Rosenthal, Alder, Lekeu and others.

Stéphane Lemelin studied with Yvonne Hubert in Montreal, Karl-Ulrich Schnabel in New York, and received both Bachelor’s and Master’s degrees from the Peabody Conservatory as a student of Leon Fleisher.  He holds the Doctor of Musical Arts degree from Yale University, where his teachers were Boris Berman and Claude Frank. He taught at the University of Alberta for more than ten years and at University of Ottawa from 2001 to 2013. While there, he served as Director of the School of Music from 2007 to 2012. He has been appointed Professor of Piano and Chair of the Department of Performance at the Schulich School of Music of McGill University starting May 2014.  A dedicated pedagogue, he has been invited to give master classes around the world.  Stéphane Lemelin was a member of Trio Hochelaga from 2003 to 2012 and is the founder and Artistic Director of the Prince Edward County Music Festival.