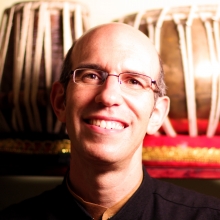 Dynamic performer Shawn Mativetsky is considered one of Canada's leading ambassadors of the tabla, and is a pioneer in bridging the worlds of Western and Indian classical music. Called an “exceptional soloist” by critic Réjean Beaucage, WholeNote's Andrew Timar adds that “as a leading disciple of the renowned Pandit Sharda Sahai, he has serious street cred.” Shawn Mativetsky is highly sought-after as both performer and educator, and is active in the promotion of the tabla and North Indian classical music through lectures, workshops, and performances across Canada and internationally. Based in Montreal, Shawn teaches tabla and percussion at McGill University.

Renowned as a champion of tabla in cross-cultural new music, having commissioned and premiered more than 50 new works for the instrument, he regularly gives workshops for composers on how to compose for tabla, including a standardized tabla notation system that he developed in collaboration with American composer Payton MacDonald. Shawn's three solo albums, Payton MacDonald: Works for Tabla (2007), Cycles (2011), and his most recent release, Rivers (2017), rooted in the rich traditions of the Benares style of tabla playing, were met with critical acclaim. In high demand as a versatile studio musician, he also appears on albums by Daniel Lavoie, Suzie Leblanc, Joel Miller, Yann Perreau, Jonathan Voyer, Parmela Attariwala, Elsiane, Elephant Stone, Ragleela, Ramasutra, Nicole Lizée, Constantinople, and La Nef, as well as a number of film and video game soundtracks.

As a practitioner of Indian classical music, Shawn regularly gives solo tabla performances, as well as accompanying kathak dance, vocal, and instrumental artists. Since 2003, Shawn has been affiliated with the Pandit Ram Sahai Foundation (UK/India), and in the summers of 2006 and 2008, hosted tabla maestro Pandit Sharda Sahai's annual summer tabla workshop. Since 2011, Shawn has been hosting his own annual summer tabla workshop at McGill University.

Shawn’s work as composer and percussionist in Geordie Theatre’s productions of Brahm and the Angel (2005) and Hansel and Gretel (2003) was met with critical acclaim. In 2003, he performed in Théâtre du Rideau Vert’s highly successful production of Paulo Coelho’s L’Alchimiste and was musical director and performer in Ensemble Mahapooram’s Le Lion du Panjshir and Danse Kalashas / Usine C’s dance production, En Himalaya. In 2006, he collaborated with the dancer Manijeh Ali, composing music for her solo dance choreography, Spirit of the Mountain. In recent years, he has collaborated with dancer Julie Beaulieu on her productions Mousson and Natya, kathak dancer Sudeshna Maulik on her productions Mehfil, Soul of Ganges, and Hands and Feet, plus in collaboration with Odissi dancer Enakshi Sinha on Crossroads and Taka Dhilanga.