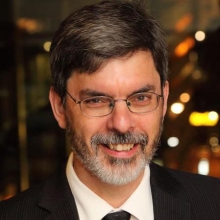 Sean Ferguson teaches composition and co-directs the Digital Composition Studios. He was Dean of the Schulich School of Music from 2011-16, Director of the Centre for Interdiscplinary Research in Music Media and Technology (CIRMMT) from 2009-2011 and Associate Director (Artistic) of CIRMMT from 2006-09. From 1997-2001 he was a counsellor of the Société québécoise de recherche en musique, for whom he was the artistic coordinator of three different week-long festivals of Quebec music. From 1999-2009 he was a member of the artistic committee of the Société de musique contemporaine du Québec.

Sean Ferguson was born in the remote Northern-Alberta community of Fort Vermilion. He has lived in Montreal since 1990, where he studied composition at McGill University. His fascination with the mechanics of perception have led him to carry out extensive research in psychoacoustics and to incorporate these findings into his compositional language. The computational demands of these psychoacoustic models has also sparked his interest in computer-assisted composition.

Ensembles that have performed his music include the Philharmonic Orchestra of Radio-France, the Montreal Symphony Orchestra, the Société de musique contemporaine du Québec, Les Temps modernes de Lyon, I Musici de Montreal and the Ensemble contemporain de Montréal, among others.