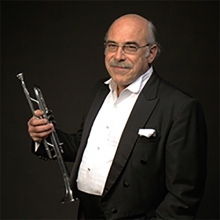 Russell DeVuyst  has performed as Associate Principal Trumpet with the Montreal Symphony Orchestra since 1992. He received a Bachelor of Music Education degree form the Boston Conservatory of Music and a Master of Trumpet performance (with Distinction) from the New England Conservatory of Music in Boston, Massachusetts.

Previous to his Montreal appointment, He has held positions as Principal Trumpet with several orchestras including, The Israel Philharmonic, The Boston Opera Company, The Rhode Island Philharmonic, the Memphis Symphony Orchestra inTennessee, the Orchestra Symphonica della RAI in Torino, Italy,  The Orquestra Sinfonica de Mineria in Mexico City, The Venezuela Symphony, and the Caracas Philharmonic in Venezuela. Additionally, he has performed as principal trumpet and section with The Indianapolis Symphony, the Vermont Symphony and the New York Philharmonic.