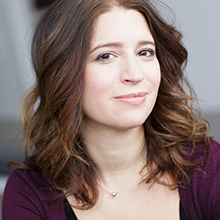 Rona Nadler enjoys a multi-faceted career in the Montreal music scene as a harpsichordist, vocalist, and music director. She has performed across the United States and Canada as a member of the quartet Infusion Baroque, while also serving as Artistic Director of the vocal ensemble One Equall Musick. She has appeared in the City of Ladies Festival, Montreal Baroque Festival, Montreal Bach Festival, and Ottawa Chamber Music Festival, and has collaborated with various local ensembles including Ensemble Caprice, I Musici de Montreal, Les Voix Baroques, and the McGill Chamber Orchestra. As coach and music director, Rona has been involved in productions with Opera da Camera, Opéra Baroque Mont-Royal, and Opera McGill. She holds a masters degree in Early Music Performance from McGill University where she studied with Prof. Hank Knox, and was an independent student at the Schola Cantorum Basiliensis. In addition to her work in the field of early music, Rona serves as Music Director and Cantorial Soloist at Temple Emanu-El-Beth Sholom in Westmount, Quebec.