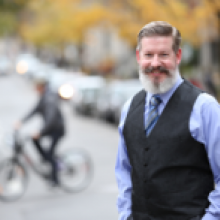 Patrick Hansen continues his unique career throughout North America as an operatic conductor, vocal coach, and stage director. For his conducting of Bartok’s operatic masterpiece Bluebeard’s Castle, New York Times critic Anthony Tommasini praised his “lithe pacing and vivid colors” while Pulitzer prize-winning Financial Times critic Martin Bernheimer wrote “Hansen respected the delicate balance between passion and introspection. He made much of Bartok’s epic essay in psycho-sexual angst.” David Patrick Stearns in the Philadelphia Inquirer noted “Hansen revealed another side of the score: stroke after stroke of musical characterization that’s often obscured by dazzling orchestral color, skillfully drawing the ear into the two characters’ hearts of darkness.” His stagings have garnered praise in both Canada and the United States. Wayne Gooding in Opera Canada: “Director Patrick Hansen...nonetheless captured the opera’s bohemian vitality and evoked – which, unfortunately, many productions fail to do – the city of Paris itself as the characterful backdrop to the action. When he ran out of space for the crowd in Act II, the crowd simply spilled down into the auditorium... the comic business was well handled... The acting, indeed, was a strong point throughout.” and Arthur Kaptainis in The Gazette: “After the Opera McGill performance on Friday I wanted to see it again...The eight singers were nicely cast...Director Patrick Hansen made a fair case for the drama. The violation [of Lucretia] involved some Etrusco-Roman wrestling and an almost literally blinding coup de theater: Lights flare and Tarquinius suddenly drops his robe, and becomes pure animal. It was a good invention.”

Mr. Hansen has been on the musical staffs of the Lyric Opera of Chicago, Pittsburgh Opera, Tulsa Opera, Opera Memphis, Des Moines Metro Opera, Ash Lawn Opera, The Juilliard Opera Center, and Glimmerglass Opera as well as being the Director of Artistic Administration for Florida Grand Opera during the opening of the 500 million dollar downtown Miami arts centre.