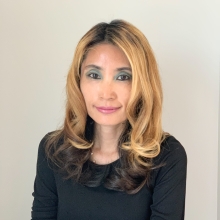 Min Rager is one of Canada’s premier female jazz pianists and composers. Born in Seoul, Korea, she moved to Montreal in 1997 to pursue a professional music career. She holds her Master’s degree in Jazz Performance from the Schulich school of music at McGill University graduating with the distinction of “Outstanding achievement in Jazz Piano”.

At the Montreal International Jazz Festival in 2005 her Quintet was nominated for the “Grand prix de jazz General Motors”. Also that year, Min was the recipient of the “Best new Artist” award from Montreal’s L’OFF Festival de Jazz.

Min has released 2 CDs as a leader, “Bright Road” and “First Step” on Effendi Records based in Montreal. In 2017, Min independently released her 3rd CD “Train Of Thought”.

In 2008, Min received a commission from CBC to compose a jazz suite for 2 pianos. The work, lasting 10 minutes, was submitted to the European Broadcasting Union as a part of “The Handel Project 2009” to commemorate the 250th anniversary of the composer’s death.

Min has also performed on several National Film Board of Canada soundtracks. She is featured on the soundtrack for the internationally acclaimed documentary short film “Letters from Pyongyang” directed by Jason Lee.

Min is currently on faculty at both the Schulich school of Music at McGill University, and Concordia university where she teaches piano studio as well as many courses including Jazz keyboard Proficiency, Jazz Arranging, Jazz Improvisation/Musicianship, Fundamentals of Improvisation along with coaching Jazz combos.