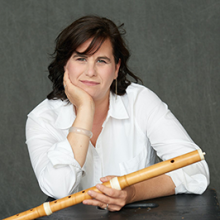 Known for her beautiful sound and expressive playing, flautist Mika Putterman loves sharing her passion for research and historical knowledge while performing. After receiving a bachelor’s degree from McGill University in Montreal with Claire Guimond, she moved to Europe and received her master’s degree from the Koninklijk Conservatorium of Brussels with Barthold Kuijken and Marc Hantaï.

Mika has recorded many concerts for both the CBC and Radio-Canada and as a soloist with labels Analekta, ATMA Classique, Outhere, and early-music.com. Her solo recordings include two world premieres on period instruments with Australian fortepianist Erin Helyard (Beethoven’s folk songs and Kuhlau Sonatas). Her newest recording is “Bach at the Mendelssohn’s” with American keyboardist Jory Vinikour.