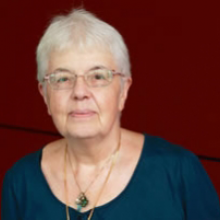 Marina Mdivani was born and began her musical education in Tbilisi, Georgia. In 1960, she both graduated from the Moscow Conservatory and began post-graduate studies there in the Professor Emil Gilels.

The next year, Ms. Mdivani was а winner in what may  have been the stiffest piano competition in history: 1962 Tchaikovsky Competition in Moscow. Other prize-winners that year included Vladimir Ashkenazy and John Ogdon.

In 1963, Ms.Mdivani completed her post-graduate studies at the Conservatory and made an eight-week tour of the United States and Canada. Тhe tour culminated in а recital at Camegie  Hall.

As principal soloist of the Moscow Philharmonic Society for twenty five years, Ms. Mdivani's career as orchestral soloist and recitalist has taken her throughout Europe, Russia and North and South America.

Ms. Mdivani has been а successful professor of piano at McGill University since 1992. Her students have  а reputation for being solid and consistent pianists. Many of them have won competitions, scholarships and awards.