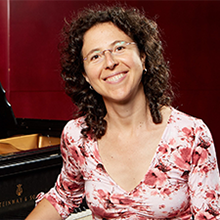 "Trudel always conducts a fine balance between the delicate and the powerful in her music…"  » Robert Bush, NBC San Diego (USA).

“An extraordinary pianist, Marianne Trudel is one of the most respected jazz musicians in Canada. She has made her way on our jazz scene so as to become an authentic and indispensable part of it…” » CBC Radio.

Juno nominated artist, Marianne Trudel is a multi-talented pianist, composer, improvisor, and arranger. At once energetic and passionate, her music cross-cuts a wide swath of musical interests. As a performer, she pursues an active career in a variety of settings ranging from solo performance to duo, Trifolia, Marianne Trudel 4 + Ingrid Jensen, septet, and large ensembles. She has presented her music in various countries: Canada, United States, Mexico, France, Spain, Germany, the Netherlands, England, Scotland, Italy, Hungary, Lituania, and China.

Recipient of the Award for the best composition-Montreal International Jazz Festival, Marianne Trudel has presented multiple artistic projects that not only bring her considerable skills to the fore but also her keen sense of creativity.

She has published 6 recordings as a leader, all having garnered rave reviews: