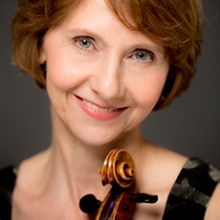 An active chamber musician, Mallette performed extensively throughout the USA and Europe as a guest artist with New York's renowned Orpheus Chamber Orchestra.   She also played with the Morency Quartet, De Seve Quartet, Ottawa String Quartet and in the duo Mallette-Fabi (with pianist Marie Fabi).

She has attended masterclasses with Yehudi Menuhin, Joseph Silverstein, Joseph Gingold and Stefan Georghiu and has appeared in numerous chamber music festivals in Canada, Germany and New Zealand.

In addition to this she has also been Co-ordinator of Strings at the Australian National Academy of Music and tutor in violin at the University of Melbourne.

Since returning to live in Montreal in 2003, Mallette has performed as a member of “La Pieta” and in ensembles such as the Montreal Symphony Orchestra and the National Arts Centre Orchestra. In 2004 she was appointed Associate Concertmaster in Orchestre Metropolitain, where she also held the position of Interim Concertmaster for two years. Professor of violin at Sherbrooke University since 2007 and McGill University since 2012, she has also lead sectionals and coached students in audition preparation at the Conservatoire de musique du Québec à Montréal in 2010 and 2011.