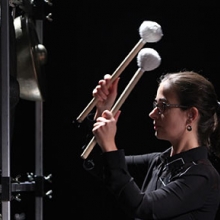 Percussionist Kristie Ibrahim is an instructor of keyboard percussion and co-director of the McGill Percussion Ensemble with Fabrice Marandola at the Schulich School of Music.

Passionate about working with artists from other disciplines, Kristie has collaborated extensively as a performer and sound designer with local and international choral directors, choreographers and theatre directors. Her sound designs for Geordie Production’s The Jungle Book (2008) and Repercussion Theatre’s A Midsummer Night’s Dream (2013), were nominated for Montreal English Theatre Awards in the category for Best Sound Design, and she is the recipient of a Montreal English Theatre Award for Outstanding Contribution to Theatre for SIXTRUM’s sound design and performance for Angélique (2017), and a Coup de coeur from the Académie Charles-Cros (France) for SIXTRUM’s CD De la percussion (2016). Kristie has performed internationally with chamber ensembles and symphony orchestras in Canada, USA, France, Mexico, and New Zealand, including the New Zealand Symphony Orchestra (NZSO), Auckland Philharmonia, Wellington Sinfonia, and Symphony Nova Scotia.