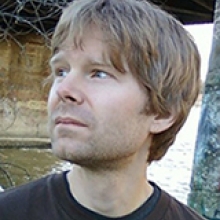 Montreal-based composer Justin Mariner has been commissioned to write pieces for numerous groups including the Via Salzburg Chamber Orchestra, the Ensemble contemporain de Montréal and the Société de musique contemporaine du Québec. His works have been recognized in competitions such as the Winnipeg Symphony Orchestra’s Canadian Composers Competition, the International Gaudeamus Music Week, the CBC National Competition for Young Composers, the SOCAN awards for Young Composers and the Victoria Symphony Orchestra’s Reel Music project (2005) in which he was awarded first place in the drama category.

Mariner holds a Bachelor’s degree from Dalhousie University and a Master’s and Doctorate from McGill. He is currently Assistant Professor at McGill and has been a concert organizer with Ensemble Kore. In 2006 he scored Jackie May’s short film Couldn’t Be Happier, which was selected for the Toronto International Film Festival that year. In 2005 he collaborated on a live comic book for Ensemble Kore with his brother, illustrator Haydon Mariner. A second collaboration, The Affirmation, was commissioned by percussionist Gina Ryan in 2009.