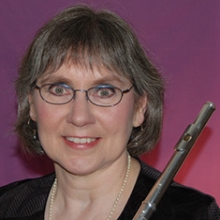 The Montreal-born flutist Heather Howes received her Master’s degree in Performance from McGill University where she studied with Timothy Hutchins, and furthered her studies with the eminent flutist, conductor and pedagogue, Geoffrey Gilbert.

In demand as an adjudicator and clinician throughout Quebec and across Canada, her comments have been a source of inspiration for many young musicians.  Ms. Howes can be heard regularly in solo and chamber-music recitals as well as in broadcasts for the CBC.