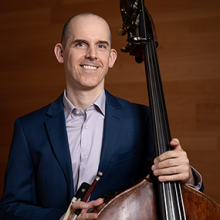 Originally from St. Catharines, Ontario, Eric Chappell began playing the double bass at a young age, and studied with Theodore Mayer and Joel Quarrington before continuing his studies with Michael Leiter at McGill University. Eric worked with many ensembles in Quebec and Ontario before being appointed by Charles Dutoit as assistant principal bass with the Orchestre Symphonique de Montréal in 1999, the position he continues to hold.

Eric has played on every recording of the OSM since joining the orchestra, and has accompanied it on many tours around the world. He has also appeared with the Australian Chamber Orchestra, and as guest principal with the National Arts Centre Orchestra and the Orchestre du Festival de Lanaudière. His wide-ranging interests have also led him to appear with new music and period practice ensembles alike.

Mr. Chappell also has a keen interest in solo repertoire written for the double bass, and is an active recitalist and chamber musician. He has been a faculty member at McGill University since 2002.