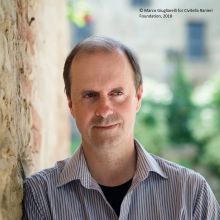 Noted for his boldly original forms, eerie refashionings of familiar musical material and phantasmagoric orchestration, Chris Paul Harman (b. 1970, Toronto) is one of Canada’s most esteemed composers.

Early recognition came when Mr. Harman was still in his early-twenties, with a series of major orchestra commissions from the CBC Radio Orchestra, the Esprit Orchestra, the National Arts Center Orchestra, the Toronto Symphony Orchestra, and the Winnipeg Symphony Orchestra. Mr. Harman was a finalist in the CBC Radio National Competition for Young Composers in 1986 when he was only fifteen years old, subsequently garnering the Grand Prize in the same competition in 1990 at the age of nineteen for Iridescence. Although largely self-taught as a composer, Mr. Harman studied classical guitar, cello, and electronic music with Barton Wigg, Alan Stellings, and Wes Wraggett respectively. He later earned a Ph.D. in Composition from the University of Birmingham (2012) while serving as an Assistant Professor (Composition) at McGill University’s Schulich School of Music. Since 2014 he has been an Associate Professor (Composition) at McGill University.

Other honours include Iridesence being named a Selected Work in the 1991 International Rostrum of Composers in Paris, and his Concerto for Oboe and Strings being chosen as a Recommended Work at the International Rostrum of Composers in 1994. Uta (Concerto for Viola and Orchestra) received an honourable mention at the prestigious Gaudeamus International Music Week (Netherlands) in 2001. Mr. Harman has won the Jules Léger Prize (the highest honour for new chamber music in Canada) in both 2001 and 2007.

A noted pedagogue, Mr. Harman served on faculty as a visiting artist at the 2017 soundSCAPE summer festival (Maccagno, Italy) in addition to the 2017 Soundstreams Emerging Composers Workshop (Toronto) as a composition mentor.