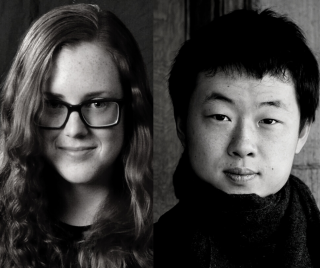 The winners of the Andrew Svoboda Prize for Orchestral Composition and the Luba Zuk Piano Duo Composition Prize have been announced.

This year the members of the jury included Professors Brian Cherney, Sean Ferguson (Chair and Dean’s Delegate) and Chris Paul Harman from the Composition Area, with Dr. Eliot Britton from the University of Toronto as external member. For the Svoboda Prize they were joined by Professor Alexis Hauser, Director of the McGill Symphony Orchestra, and for the Zuk Prize they were joined by Professor Sara Laimon of the Piano Area.

Though a challenge to evaluate the many applications, Sean Ferguson shares that, “We were impressed by both winners, each of whom has a burgeoning compositional career already in progress. Both Chelsea and Zhuosheng presented exciting project proposals that we look forward to hearing in the future!”

We wish these two talented and deserving prize-winners a hearty congratulations. The Luba Zuk Piano Duo Composition Prize-winning piece is slated to premiere in 2022, and the Andrew Svoboda Prize for Orchestral Composition award-winning work can be heard during the 2022-2023 Schulich concert season.

Discover the composer behind the prize by reading our interviews with Chelsea Komschlies and Zhuosheng Jin.