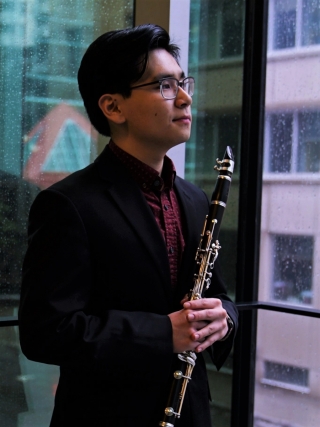 Originally from Vancouver, Tyler Song is a passionate musician who has performed with numerous ensembles such as the McGill Symphony Orchestra, the UBC Symphony Orchestra and the Vancouver Symphony Orchestral Institute Orchestra. He has had the pleasure of performing under the batons of conductors such as Otto Tausk and Bramwell Tovey and has also been the recipient of numerous awards and scholarships, including the Brunold Award for Classical Music Making, the J. Wesley Foster Memorial Scholarship and the Norah Mansell Music Scholarship. He credits Jenny Jonquil and Todd Cope as his most influential teachers.

As a finalist of the 2019-20 Classical Concerto Competition, Tyler is scheduled to appear with the McGill Symphony Orchestra January 17 and 18 in Pollack Hall. Read more about the remarkable Mozart Clarinet Concerto and the soloist’s preparation in our Q&A below.

What does it mean to you to perform Mozart’s Clarinet Concerto with the McGill Symphony Orchestra?

The Mozart Clarinet Concerto is the most important piece of music in the entire clarinet repertoire and performing it has been something I’ve desired for a long time. It was the first of its kind and inspired generations of composers to compose their own clarinet concerti. The opportunity to perform it with the McGill Symphony Orchestra, an ensemble that has shaped much of my own playing, could not feel more appropriate. I’m truly excited to give life to this musical masterpiece containing some of Mozart’s best writing.

How did you prepare for the performance of this piece?

A particular focus in my preparation was to convey each phrase in Mozartian styles and idioms. This concerto unmistakably draws from his prolific work as an opera composer and I think it’s critical to use the entire colour palette of the clarinet in order to be true to that operatic nature. I examined the phrasings of opera singers to try and achieve this more vocal style. Being a music theory enthusiast, I also studied the theoretical form of each movement in order to understand how each melody relates to each other. This informed many of my musical decisions as well.

What should an audience member who might not be knowledgeable about the piece look out for in each movement?

The first movement tells a story with the clarinet. With a little imagination one can hear characters engaging in musical dialogue on clarinet as the orchestra creates delicate backgrounds for each exchange. Many of these dialogues are also repeated identically, giving the performer the artistic liberty to shape the music as they see fit. The result is that two consecutive phrases can have the exact same notes and rhythms while being dramatically different in character.

The gentle melodies and soft textures of the second movement are breathtakingly beautiful. They evoke a sense of innocence and sweetness, almost as if cradling a newborn child, contrasting greatly with the two other movements. This movement also develops the dialogues on clarinet in the first movement and augment them to involve the orchestra, which responds to each clarinet line with a lusciousness only full orchestral tuttis can have.

The final movement of this concerto is a joyful dance. The orchestra is now fully engaged, constantly changing between accompanying, responding and sometimes even interrupting the clarinet. Mozart also uses the Sonata-Rondo form for this movement, something he perfected in his piano concertos, to great effect. The repeating opening theme brings a liveliness to the dance while the middle section uses dramatic leaps that span the entire range of the clarinet and rapid alternations between characters. One of my favourite sections is the final coda. The clarinet begins with repeated rising arpeggios that bring a bubbly excitement to finish the entire concerto in a truly spectacular fashion.

Buy your tickets to the McGill Symphony Orchestra’s January 17 and 18 performances here.