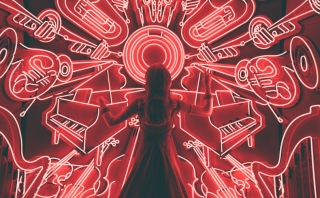 Writer Sarah Lebeau explores how technology is transforming musical practice at the Schulich School of Music.

In January 2021 a new Performance Laboratory got up and running at the Schulich School of Music. Finding a space to call home at the Centre for Interdisciplinary Research in Music Media and Technology (CIRMMT), this simulation lab is the brainchild of Professor Aaron Williamon, director of the Centre for Performance Science at the Royal College of Music (RCM) in London. He is also a Dean’s Chair at the Schulich School of Music, a visiting position funded by the Schulich Foundation.

In trying to bridge this gap between practice and performance, Williamon developed a simulation for music students at the RCM, drawing inspiration from the methods used to train surgeons next door at Imperial College London. Now, with the help of colleagues at the Schulich School of Music, Williamon is bringing his game-changing simulation to McGill students. Dr. Isabelle Cossette, an associate professor of music education at Schulich and the former director of CIRMMT, has been facilitating simulated performance sessions.

According to Williamon, the adage that it takes 10,000 hours of practice to become an expert musician doesn’t tell the full story.

When he began this project, Williamon was looking to create a space for musicians to deal with their performance anxiety. But over time he noticed that there are many other things people want to work on, like how to gracefully take a bow or project presence on stage. The simulation has since expanded into a comprehensive pedagogical tool that can be used to address multiple dimensions of performance.

The Performance Laboratory is just one component of a larger project that Williamon and Cossette are leading called the Performance Science Initiative, an ambitious multidisciplinary collaboration between the Schulich School of Music, CIRMMT, and several other departments at McGill. Aiming to inspire new ways of thinking, the initiative is based on the idea that musicians can learn from how “performance” is approached in other fields, like medicine and sports science.