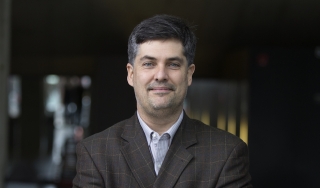 Congratulations to Prof. Marcelo Wanderley on his accomplishment as the most cited author over the entire lifetime of the New Interfaces in Musical Expressions (NIME) conference. With students and colleagues, he has co-authored 48 NIME papers presented at 17 conferences which had a total of 1,391 citations over 20 years [Fasciani & Goode, 2021. p. 24]. In addition, Wanderley has also co-authored the first- and third-most-cited articles in the history of NIME.

As the director of the Input Devices and Music Interaction Laboratory, former director of CIRMMT and Professor of Music Technology at the Schulich School of Music, Wanderley’s interdisciplinary research focuses on the development of novel interfaces for music performance, computer music, electronic instrumentation, human-computer interaction, and design/evaluation of digital instruments.

McGill also holds the honour of being the institution with the third-most authors, as well as the fifth-most-cited institution of the conference [ibid. p. 18].

Since its inception in 2001, NIME has established itself as one of the main international events within the field of music technology/sound and music computing. It brings together expert technologists interested in musical interaction and musicians keen on novel musical interfaces and new challenges — together building opportunities and exploring future directions of the musical branch of Human-Computer Interaction. NIME is inherently cross-disciplinary, featuring works ranging from the scientific to artistic aspects of new interfaces for musical expression. Contributions include topics such as musical controller design and technology, frameworks and interfacing protocols, reports on performance and composition, education and entertainment, perceptual and cognitive issues, as well as the artistic, cultural, and social impact of music technology.

We celebrate Prof. Wanderley’s achievements and his contributions to the global development of music technology and anticipate the innovations he and his students will bring to Schulich, CIRMMT, IDMIL and the international musical community.