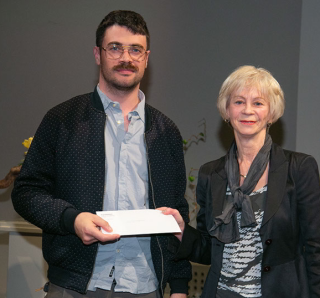 Gabriel Dufour-Laperrière has been awarded the 2019 “Prix d’Europe in Composition” from l’Académie de musique du Québec!

A recent graduate of Schulich’s Doctorate in Composition, Gabriel Dufour-Laperrière held a brilliant Oral Defence just a weeks ago on May 27. His thesis piece, a sextet titled “Dériver”, was premiered on April 3 by Ensemble Paramirabo and was also recorded in studio. Gabriel’s music impresses with its keen sense of control over the directionality of the musical discourse. He uses in an exemplary way the phenomenon of convergence of the sound vectors to establish the dynamism of the form. The result is a fascinating work which, at the detours of its convolutions and of its controlled and multifarious redundancies, really succeeds in embodying the idea of “drifting” into the sound world.

Gabriel said of his time at Schulich: “Studying composition at Schulich has been an amazing experience. During the four and a half years of my doctoral studies, I was able to concentrate on music while being surrounded by truly inspiring teachers and colleagues. I improved greatly through the healthy mix of generosity and high standards they maintain. I’m especially thankful to my inspiring research supervisor Denys Bouliane. He is someone who works relentlessly and always relies exclusively on his ears to judge a piece of music. He has one of the most honest, generous, and knowledgeable critical minds that I’ve encountered. He is certainly responsible in a big way for shaping me into the composer I am now as well.”

Gabriel will work next season in close collaboration with composer and pedagogue Lasse Thoresen in Oslo. Gabriel’s work has already been applying Lasse Thoresen’s Aural Sonology seminal research for developing his unique compositional tools and will pursue the work already progressing on a series of articles in French with colleagues Dominique Lafortune and Philippe Macnab-Séguin on Thoresen’s “Music-as-heard” approach.

We all wish Gabriel a wonderful time during his stays in Oslo!