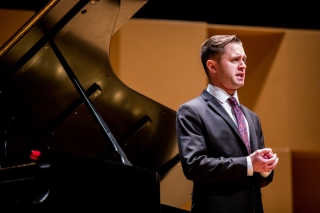 Where are you currently based?

I am currently still based in Montreal!

How has the Wirth Vocal Prize influenced your career and your development as an artist?

Perhaps the most significant thing that changed after winning the Wirth Vocal Prize was how I viewed myself as a musician and human. In the months leading up to the competition I received a string of rejections from every program that I had applied to. It’s very easy for me to interpret that as failure, both as a musician and as a person. When I won the Wirth Prize, I suddenly felt that the people around me believed in my musical talent, and in turn thought that I was a good person. I thought about how winning a prize had affected my feelings of self-worth, and thought hard about some words that Stephen Hargreaves said during my time as a student: “What does it mean to be successful?” I realized that if I needed a prize to validate myself as a musician or person, then I wasn’t focusing on the things that were important in my own success, namely that I am happy doing what I am doing.

What has been the most surprising thing about post-graduate life as a singer?

There was actually a period of two years before I arrived at McGill when I was no longer a post-graduate student, and trying to make a living as a singer; I still forgot how difficult it is to find yourself off of a regular schedule! This time around, I feel more prepared to handle the musical side of things; I did a 23-show tour of La bohème with Against the Grain Theatre, and even though it was vocally taxing, I felt good about the level of singing that I was able to maintain during the tour. I have to thank my teacher, Joanne Kolomyjec, for her constant support and guidance; I wouldn’t have been able to do it without her!

How has your McGill education served you in your career? Are there any specific experiences, classes, or relationships that have been especially valuable?

As I mentioned above, my teacher Joanne Kolomyjec has played a very significant role in my life since I started studying at McGill. I still hear her voice in my head when I’m singing certain repertoire, reminding me of things to focus on while I’m performing. My time performing in Opera McGill was also particularly valuable to me, as it was a safe place to remind myself of healthy and effective ways to rehearse opera and how to prepare a role. My time at McGill was truly excellent, and I am very thankful for the education and experience that I received there!

How do you maintain your mental health and well-being amidst the challenges of a singing career?

This is a particularly difficult aspect of being a musician for me. I have become very aware of what I need on a day to day basis to remain healthy and happy, and for me this largely means being able to have a few hours to myself each day, having my own space at the end of the day, and getting enough sleep. My body and mind feel best with at least 9 hours of sleep, and I try to get that every day.

What roles, projects, or milestones are on your wish list for the next decade?

This is not actually something that I think of often, and perhaps I should! I have constantly struggled with being a tenor who doesn’t have a solid high C, so this continues to be something that I focus on. Otherwise, I think that I generally just approach each role, or aria, or song that I am working on as they happen! That being said, I recently was inspired to start preparing a list of comprimario roles which I am ready to perform at any given time, well. I think it would be useful for me to know many small roles which I would be ready to perform professionally, now.

What do you miss the most about Schulich and / or the city of Montreal?

I really loved having the schedule of lessons, rehearsals, coachings, and classes at McGill! It’s difficult to keep yourself motivated in the same way where there aren’t as many deadlines facing you head on. I also miss seeing my coaches and teachers so frequently; I always felt so inspired to be my best around them!

The fifth edition of the Wirth Vocal Prize will be taking place this Sunday, February 9, 2020 at 2:30pm in Pollack Hall. Unable to attend in person? This event will be webcast live on our YouTube channel!