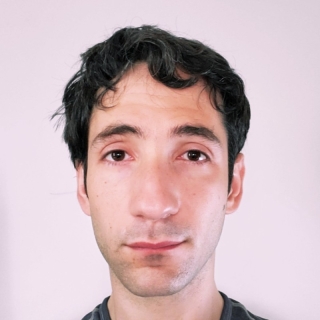 As Teaching Assistant for MUAR 392 (Popular Music after 1945), Max showed an eagerness to support the instructor and students in whatever way. he could. Whether it be by assisting in the “live” classroom by monitoring the chat, responding directly to students, reading their questions/comments out loud, or participating in classroom dialogue, it was clear that he was there to help.

Letters of recommendation detail examples of Max's involvement; lending a hand to describe musical concepts that are hard to articulate by singing or framing the concept in a different way, creating an MP3 of himself with and without audio effects to help students hear it more clearly, or even making different Zoom musician backgrounds for each class. Max was proactive and took initiative to do things that would benefit the class. In concert with the instructor, he helped facilitate dynamic discussion, welcoming all manner of thoughts and questions. His commitment to connecting with students, his awareness of varying musical backgrounds, and his useful feedback on assignments made everyone in the class feel comfortable and made the learning experience intriguing.

In celebration of this achievement, we asked Max to elaborate on his teaching philosophy, share a stand-out moment from this year, give advice to his starting-at-university-self, and more...

What are some elements that are important to your teaching philosophy?

I believe that most people can understand most things. Or that even the most complex ideas can be made easy to understand if they are communicated well. Or that simple ideas can be made unnecessarily complex if they are communicated poorly (there's a lot of that in math and science, I'm learning). I guess that would be the major trap to avoid in teaching.

What do you want your students to leave your classroom with?

I hope students leave the pop musicology class feeling like they know how to break down a musical recording, instead of thinking of it as a mass of inscrutable sound.

What will you carry from this past year into your coming years of teaching/studies?

Do you have a stand-out teaching moment from the past year (knowing that it was a pretty unconventional year, to say the least)?

Certainly it can be a little, erm, Sisyphean, to lecture to a computer screen for a semester (though, thankfully I had Jennifer to banter with); but the distance can make office hours even more rewarding. When a student comes to you, seemingly out of nowhere, with a clear understanding of the class material, it's doubly exciting. And I met more than a few very cool students this year.

Take your courses and your grades seriously; higher education is a tremendous privilege. And, what's more, if you flunk out they'll never let you forget about it. Trust me. As far as creativity goes, no class will ever help you there. You just have to take a chance, and try doing something you don't know how to do.

Dancing an impromptu jig at a music store in Ireland. I believe I was three. The album playing was "Feadóga Stáin" by Mary Bergin.

Impossible to tell! I've had this farkakteh trajectory for one reason or another. I used to say that if I hadn't been a musician, I'd be a scientist or a mathematician; but I'm kind of getting to do some of that now. So, I'm out of answers.

What was the last book you read / show you watched / album you listened to?

Well, I've been busy. But I have been slowly picking through this collection of poems by Apollinaire, because it's nice to have a little magic in your life. I like the U.S. Girls stuff, but gosh, maybe that's a little old by now.

I have a list and it's endless. Math things, mostly; vector calculus, real analysis... I ordered a textbook to go through this summer.

A bit more about Max Henry

I'm a musician and nerd. I studied Jazz drums McGill in the early 2000s, but left before finishing the degree to tour as a synth player with my rock band SUUNS. In the interim I wrote music for film, recorded and produced music as an audio engineer, and played on many albums as a session musician.  I am currently wrapping a master's degree in Music Technology,  where my research under Prof's Stephen McAdams and Philippe Depalle is focused on signal processing and music perception. In the Fall I'm beginning a second master's degree in department of Electrical and Computer Engineering under Prof. Jeremy Cooperstock, focusing on human factors.

About the Schulich School of Music Teaching Awards

Each year the Schulich School of Music recognizes faculty members and student instructors for their outstanding contributions. The Schulich School of Music Teaching Awards recognize excellence, commitment and innovation in teaching, and the importance of these qualities in the academic experience of students at McGill. Prizes are awarded annually to each winner at Spring Convocation.