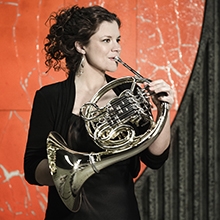 Originally from West Chester, Ohio, Catherine Turner has been the Second Horn of the Orchestre Symphonique de Montréal since 2010 and Principal Horn of the Colorado Music Festival Orchestra since 2015.  Before joining the OSM, she held the positions of Fourth Horn in the San Antonio Symphony and Assistant Principal Horn in The Florida Orchestra.  As a soloist, she was the winner of the Horn Division of the 2014 Susan Slaughter Solo Competition at the International Women’s Brass Conference, and has been featured on Public Radio International’s “From the Top.” She has also performed internationally as a soloist, giving both the U.S. and European premieres of Brant Karrick’s “Taranto Reflections” for Horn and Wind Symphony, at the American School of Paris and St. John’s Smith Square in London.  An avid chamber musician, she is a founding member of the Mount Royal Brass Quintet, in residence at McGill University’s Schulich School of Music, and a regular participant in the Serenata at Saint John’s chamber series. Prior to her appointment with The Florida Orchestra, Catherine attended Rice University’s Shepherd School of Music, where she studied with William VerMeulen.  Her studies also included numerous summer programs, with fellowships at the Tanglewood Music Center and the Aspen Music Festival, where she was a student of John Zirbel and the winner of the Brass and Percussion Concerto Competition in 2009.