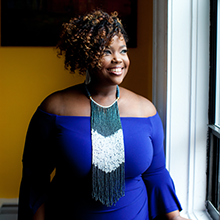 Acclaimed by Downbeat Magazine as a "rising star" singer with “soulful inflection and remarkable, Fitzgerald-esque scat prowess” and hailed by All About Jazz as a “first class saxophonist that blows the proverbial roof of the place”, Camille Thurman has been amazing audiences throughout the world with her impeccable sound, remarkable vocal virtuosity and captivating artistry.  Many have praised her vocal abilities to the likeness of Ella Fitzgerald and Betty Carter. Her lush, rich & warm sound on the tenor saxophone has led others to compare her to tenor greats Joe Henderson and Dexter Gordon.

Camille was a recipient of the Martin E. Segal –Lincoln Center Award for Outstanding Young Artists and a runner up in the 2013 Sarah Vaughan International Vocal Competition. She was a two-time award winning recipient of the ASCAP Herb Alpert Young Jazz Composers Award and a winner of the Fulbright Scholars Cultural Ambassador Grant to Nicaragua and Paraguay. Her compositions were featured and performed by her quartet in the ASCAP/ Kennedy Center "Songwriters: The Next Generation" showcase. She was the first woman in 30 years to tour and perform full time internationally with the world ren own Jazz At Lincoln Center Orchestra as a saxophonist/woodwindist (2018-2020) Camille has earned accolades from the media including JazzTimes Magazine, Downbeat Magazine, NPR, The New York Times and Jazz Night In America. As a leader, she has released four records—Origins, Spirit Child (Hot Tone Music), Inside The Moment (Chesky Records 2017) and “Waiting For The Sunrise” (Chesky Records 2018).