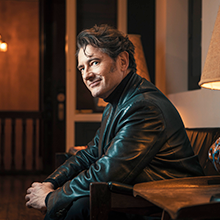 Canadian-Italian baritone Brett Polegato’s artistic sensibility has earned him the highest praise from audiences and critics: The New York Times has praised him for his “burnished, well-focused voice” which he uses with “considerable intelligence and nuance.” He appears regularly on the world's most distinguished stages, including those of the Metropolitan Opera, Lincoln Center, La Scala and Carnegie Hall. A three-time Grammy Award winner, he can be heard as soloist in the Grammy Awards’ Best Classical Recording of 2003 - Vaughan Williams’ A Sea Symphony (Telarc) with the Atlanta Symphony Orchestra.
In March of 2022, Brett creates the role of Richard Brown in the world premiere of Kevin Puts’s The Hours with the Philadelphia Orchestra conducted by Yannick Nézét-Séguin, and returns to the Bregenzer Festspiele next summer as Sharpless in Puccini’s Madama Butterfly.

One of today’s most sought-after performers on the operatic stage, Brett has made a name for himself in a number of dramatic roles, most notably the title roles in Don Giovanni and Eugene Onegin, which his has sung at the Canadian Opera Company, the New Israeli Opera, Grange Park Opera and Vancouver Opera. He recently returned to the UK to perform Rodrigo in Don Carlo, and he made his debut as Amfortas in Wagner’s Parsifal under the baton of Yannick Nézet-Séguin, at the maestro’s request, for the Festival de Lanaudière. His critically acclaimed portrayal of Kurwenal in Tristan und Isolde with maestro Daniele Gatti has been seen most recently by audiences of the Théatre des Champs-Élysées and the Teatro dell’Opera di Roma. In 2010, he sang the title role in Berg’s Wozzeck at Moscow’s prestigious Bolshoi Theatre in a production directed by Dmitri Tcherniakov and conducted by Teodor Currentzis. He has appeared with the Chicago Lyric Opera, Houston Grand Opera, Opéra de Genève, Glyndebourne Festival Opera, Teatro Real in Madrid, Saito Kinen Festival, Florence’s Maggio Musicale, and the Teatro Colón in Buenos Aires in over 50 roles, including Ford (Falstaff), Balstrode (Peter Grimes), Zurga (Les Pêcheurs de Perles), Starbuck (Moby Dick), Lieutenant Audebert (Silent Night), Oreste (Iphigénie en Tauride), Frank/Fritz (Die tote Stadt), and Sharpless (Madama Butterfly).

Mr. Polegato made his Wigmore Hall recital debut in 2019 with pianist, Iain Burnside, and his Carnegie Hall recital debut at Weill Recital Hall in 2003 with pianist, Warren Jones. He returned to Carnegie Hall the following year with the Atlanta Symphony to reprise their Grammy Award winning performance of A Sea Symphony, and again in 2012, as soloist in Walton’s Belshazzar’s Feast. As part of “Bernstein At 100,” he made his debut with the Orchestre National de Lille as the Celebrant in Bernstein’s Mass. He has garnered critical acclaim as soloist in Zemlinsky’s Lyrische Symphonie with conductor, Yannick Nézet-Séguin, and for his interpretation of the title role in Mendelssohn’s Elijah. He has sung with most of the world’s finest orchestras, including the Cleveland Orchestra, the Boston Symphony and the Chicago Symphony, and the Rotterdam Philharmonic Orchestra.

Much in demand as a Master Teacher, Brett has been teaching at the Schulich School of Music at McGill University since 2017. As a performer of almost 30 years, he is committed to sharing his extensive interpretive and technical knowledge with a new generation of singing performers.