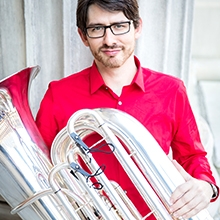 Austin Howle has served as the Principal Tuba of the Montreal Symphony Orchestra since 2013. A native of Oxford, Mississippi, he has performed in ensembles across four continents and 15 countries, most recently in China and Japan. He served as Acting Principal Tuba of the Iceland Symphony Orchestra in 2011, and has performed with the Cincinnati Symphony as well as on numerous occasions with Houston Symphony Orchestra. As a soloist, Howle performed at the Kennedy Center as part of the 2011 Millennium Stage Conservatory Project. He has given masterclasses at Rice University and the Eastman School of Music. Howle earned a Master of Music degree from Rice University, where he studied with David Kirk, and a Bachelor of Music degree from Florida State University, where he studied with Paul Ebbers. His other principal teachers have included Chester Schmitz, Michael Grose, and Scott Watson.