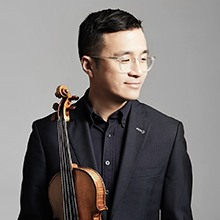 B.Mus., M.Mus. and Artist Diploma from the Juilliard School

Wan’s discography includes Grammy-nominated and Juno, Felix and Opus award-winning releases on the Analekta, Onyx, Bridge, and Naxos labels with the Seattle Chamber Music Society, New York’s Metropolis Ensemble, Charles Richard-Hamelin and the New Orford String Quartet. In the fall of 2015, he released a live recording of all three Saint-Saëns violin concerti with the OSM and Kent Nagano under the Analekta label to wide critical acclaim. His recent live album of works for violin and orchestra by Bernstein, Moussa and Ginastera with Nagano and the OSM won the 2021 Juno award for Best Classical Recording for Large Ensemble.

Wan enjoys a deep collaborative relationship with Canadian pianist Charles Richard-Hamelin, silver medalist of the 17th Chopin International Piano Competition, with whom he has recorded all ten Beethoven sonatas for piano and violin. Their next recording will feature the sonatas for violin and piano by Robert Schumann, to be released in the fall of 2022.

Wan graduated from The Juilliard School with Bachelor of Music, Master of Music and Artist Diploma degrees and is currently a member of the New Orford String Quartet, Associate Professor of Violin at the Schulich School of Music at McGill University, Artistic Director of the Prince Edward County Chamber Music Festival and for the 2017-18 season was Artistic Partner of the Edmonton Symphony Orchestra. In 2019, he won the Part-Time Teaching Award at the Schulich School of Music.

Andrew Wan performs on a 1744 Michel'Angelo Bergonzi violin, and gratefully acknowledges its loan from the David Sela Collection. He also enjoys the use of an 1860 Dominique Peccatte bow from Canimex.