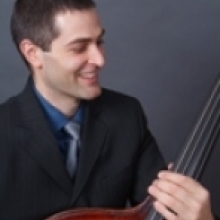 Bassist Ali Yazdanfar is equally at ease in the orchestra, when performing solo or chamber music, and also while teaching. Currently principal bass of the Orchestre Symphonique de Montréal, he was formerly a member of the National Symphony in Washington, DC and the Houston Symphony, and he has appeared as principal bass with the San Francisco Symphony and the National Arts Center.

Mr. Yazdanfar met the bass at a young age in Wyncote, Pennsylvania, later studying with Boris Blumenkrantz. In 1996, he received a B.A. in physics at The Johns Hopkins University, earning Phi Beta Kappa distinction and the Kerr Memorial Prize for the top senior in physics. Meanwhile, he joined the orchestra and repertory classes at the Peabody Conservatory, studying with Paul Johnson. Other teachers have included Paul Ellison, Hal Robinson, and François Rabbath.

Mr. Yazdanfar has a wide range of interests, thereby devoting much of his time to musical pursuits outside the orchestra. With violist Karine Rousseau, he co-founded the Ensemble Ulysse, a chamber group in residence at the Georgetown Lutheran Church. He has given recitals in Montréal, Baltimore, Washington, and Houston, and was the top American prizewinner in the 2005 ISB solo competition. In 2006, he participated in a 75th birthday concert for François Rabbath, performing solo and in groups. Finally, he has presented masterclasses at, among other places, McGill University, the Peabody Conservatory, and the Curtis Institute. He has taught at the Domaine Forget since 2000, the National Orchestral Institute, George Vance’s Summer Bass Workshop, Bass Club (England), and has been on the faculties of the University of Maryland as well as the Catholic University of America. He recently obtained teaching and performance diplomas from L’Institut International François Rabbath.