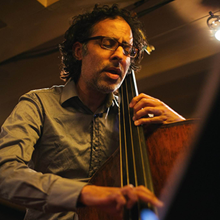 “Adrian Vedady should be considered as one of Montreal’s best double bassists. The quality of his rhythmic accompaniment, the fluidity of his phrasing, the clarity and roundness of his lines makes him one on the most important contributors at the heart of the local scene.” -Alain Brunet, La Presse, 2009.