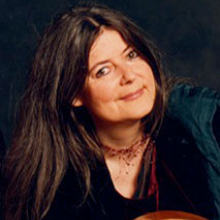 Prix Opus 2002, Personality of the year.

Cellist, gambist, continuo player par excellence, Susie Napper is known for her colorful, even controversial performances of both solo and chamber repertoire of the 17th and 18th centuries. Having spent her childhood in an artistic milieu in London, in her late teens she moved to New York to study at the Juilliard School, then to the Paris Conservatoire. San Francisco followed, where, after a foray into contemporary music, she co-founded and directed the Philharmonia Baroque Orchestra. Since then she has spent two decades with a foot on either side of the Atlantic as principal cellist with several groups including Stradivaria in France, Ensemble Caprice, the Studio de Musique Ancienne de Montréal and Les Boréades in Montreal, and the Trinity Consort of Portland. Her concert tours have taken her as far afield as China, Japan, New Zealand, India, the Middle East, as well as most European countries. As a member of the very active viol duo Les Voix humaines, she has discovered a new facet of musical expression in the form of musical arranging, thus providing an endlessly fascinating new repertoire for two viols. Susie Napper teaches at McGill University, the University of Montreal and the Royal Consevatory, Copenhagen and founded the Festival international Montréal Baroque which is presented in Montreal in June since 2001. She was awarded the «Prix Opus» 2002 for «Personality of the year» by the Conseil québécois de la musique. In 2011, she was named Woman of Merit for the Arts, Montreal.

Her recordings, which include most of the known repertoire for two viols, can be heard on Harmonia Mundi, EMI, Erato, ADDA, CBC Records, Naxos, and most notably on the ATMA label. But her true vocation is not on the concert stage or the recording studio. The kitchen is the center of her domain, where she creates dishes both colorful and controversial for her own pleasure as well as that of her guests.