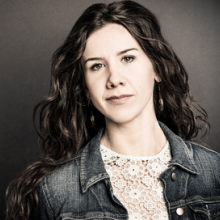 It is no accident that time and time again, both critics and fans alike describe Sophie Day's voice as remarkably pure, spell-binding and brilliant. As a result, she has earned a strong reputation as one of Quebec’s most sought-after young vocalists. Since her career debut in 2000, Sophie has performed in front of millions, on multiple continents, in a multitude of productions and has won numerous awards.

Sophie’s experience as jazz singer is further enriched by her extensive background in the colorful traditions of French Chanson, leading to captivating musical moments, including her debut album Fleurs bleues (Distribution Select/Quebecor).

Although Sophie Day, also know as Sophie Tremblay, performs in diverse musical settings throughout the world, her expertise spreads beyond the spotlight and into her teaching studio. Devoted to the art of “teaching the unteachable”, Sophie is sought out by high-profile professional vocalists, actors and even newscasters looking to improve their interpretation, range, tone, technique and endurance through private coaching. Additionally, Sophie has been teaching on staff at CEGEP colleges in both Montreal and Quebec City for the past eight (8) years, where she empowers the next generation of young vocalists with the tools and techniques professional artists in the real world are expected to master in this competitive age.

Whether on stage in the world-famous role of Eponine in Les Misérables, or performing compositions & jazz standards at her weekly shows in Vieux Montreal, critics and spectators alike agree: Sophie Day is one of the most remarkable vocalists Montreal has to offer.

“Sophie Day is an excellent performer and I believe we’ll be hearing more about her in the near future.” – Alain Brunet (La Presse)

“If there’s one name to remember from this immense body of talent, it’s Sophie Day. Her voice is of remarkable purity.” – La Presse (Montreal)