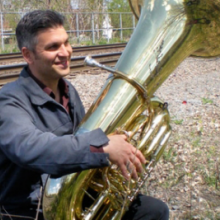 Sasha Johnson began his musical training at age 16, studying brass chamber music and tuba with Sam Pilafian at the Empire Brass Seminar of the Boston University Tanglewood Institute. He went on to study at the University of Toronto with both Mark Tetreault and Murray Crewe of the Toronto Symphony, with Toby Hanks at the Manhattan School of Music, and with Alain Cazes at the Conservatoire de Musique de Montreal. His additional private teachers have included Arnold Jacobs, Gene Pokorny, Mel Culbertson, Dennis Miller and Richard Erb.
In 1997 Sasha became the first Canadian tuba player to be accepted into the Von Karajan Academy of the Berlin Philharmonic. This program trains a small number of young professionals in the sound, style, traditions and standard of the Berlin Philharmonic Orchestra. Having begun his professional career in Berlin, Sasha went on to perform with many other European orchestras including the Berlin Symphony, the Berlin State Opera, the Radio Orchestra Berlin, the Orchestre Symphonique de Radio France, The Orchestre de Paris, the Ensemble Modern and the Orchestre Nationale de Bordeaux. He has performed in such music festivals and concert venues as the Lucerne Festival, the Festivale d'Aix en Provence, the Concertgebouw, the Konzerthaus Wien, the Theatre Champs-Elysée, the Schleswig-Holstein Festival, the Salzburg Festival and the BBC Proms, under such eminent conductors as Claudio Abbado, James Levine, Pierre Boulez, Kent Nagano, Essa-Pekka Salonen, Charles Dutoit, Kurt Masur and Seiji Ozawa.
Sasha returned to Canada in 2001 and has established himself as a prominent performer and pedagogue. He currently lives in Montreal and performs there regularly with the Orchestre Symphonique de Montreal. He is the instructor of tuba at the Glenn Gould School and an instructor of low brass and chamber music at McGill University. In January 2009, Sasha was appointed principal tuba of the National Ballet of Canada Orchestra, and recently finished playing the 2009/2010 season with the Toronto Symphony Orchestra.