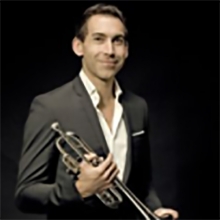 Paul Merkelo, solo trumpet of the Orchestre Symphonique de Montréal, is recognized as a great virtuoso, and one of the top trumpet players in North America.Renowned throughout North America and beyond as one of the finest trumpet players of his generation, Paul Merkelo is recognized for his “pure technical prowess” (Rochester Democrat & Chronicle) and for his “unusual lyrical gifts” (Gramophone).

As solo trumpet with the Montreal Symphony Orchestra, which he joined as Principal in 1995, Mr. Merkelo is regularly praised by the Montreal press as “a spectacular soloist… a most impressive master of his instrument,” (The Gazette) and as a “great virtuoso … dazzling” (La Presse). Mr. Merkelo has been featured frequently with the OSM, including tours by the orchestra in South America and at Lincoln Center in New York.