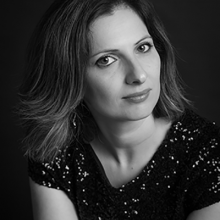 Described as “a musician of exceptional intelligence who stands out whether playing chamber music or solo” (Gilbert Kalish), Patil Harboyan is a Montreal-based Armenian pianist who leads a versatile musical career as a performer, chamber musician and teacher.

Patil holds a Doctorate in Musical Arts from Stonybrook University, where she studied on a full scholarship. Recipient of grants from the Canada Council for the Arts and the Conseil des arts et des lettres du Quebec and winner of various competitions, she has appeared in solo recitals and chamber music concerts throughout North America. Patil has collaborated with some of the best musicians of our time, such as Kimy McLaren, Isabel Bayrakdarian, Aline Kutan, the Fibonacci Trio and members of the Fitzwilliam Quartet. Chamber music is at the core of her life as a musician. She is a founding member of the Ararat Trio, which had its debut appearance at Weill Recital Hall at Carnegie Hall, in 2007, as well as the Trio de l’Île which performs regularly throughout Quebec. Her recording with cellist Heather Tuach called Music from Armenia (Divine Art Records) has been described in Gramophone, the prestigious music magazine, as a “delightful disc of discoveries”. The duo presented the programme of the recording in concert at Carnegie Hall in 2015.

Parallel to her performing career, Patil is also an active pedagogue. She is often seen on jury panels for various music competitions. She currently teaches at the University of Quebec in Montreal and at the Schulich School of Music (McGill University).