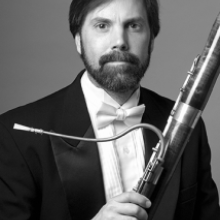 Martin Mangrum has been Second Bassoon of the Orchestre symphonique de Montréal since 2000. Prior to his appointment in Montréal, he was Principal Bassoon of the Real Orquesta Sinfónica de Sevilla, and Assistant-Principal of the Orquestra Simfònica de Barcelona i Nacional de Catalunya. Martin holds a Doctorate   from the Juilliard School in New York, where he studied with Stephen Maxym (his doctoral document is a method for the bassoon based on his teachings).  He has also studied extensively with Mordechai Rechtman, with whom he continues to collaborate closely. Currently, Martin teaches bassoon and chamber music at the Schulich School of Music of McGill University, as well as at the Université de Montréal.